"Damn the PKK," banners held up in Toronto as terrorist organization protested 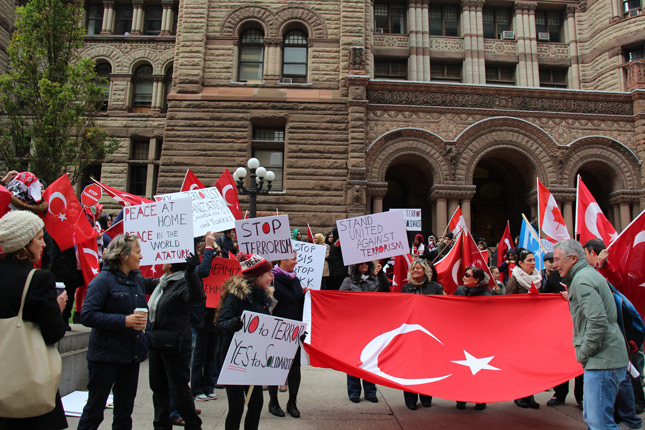 by daily sabah
Oct 18, 2015 12:00 am
The PKK terrorist organization was protested on Sunday by Turkish expats living in Toronto, Canada. Protestors gathered in front of the Old City Hall located in the city center of Toronto.

Journalist/writer Abdurrahman Dilipak was among those who attended the protest as he was in the area for a conference.

Flyers explaining the conflict between the PKK terrorists and the Turkish government were handed out.

One of the organizers of the protest, Gürcan Kaya said, "For the 30-40 years of terror we have lived through, we gave away three more martyrs today. Even though we live here, our companions, friends and what we here all affect us. Our goal is to call for unity and to say 'stop' to terror. We came together to damn terror, this is our aim."

Turkey has been conducting operations against the PKK, an organization listed as terrorist by Turkey, the United States, and the European Union, since late July, when a two-and-a-half year lull in the fighting ended.