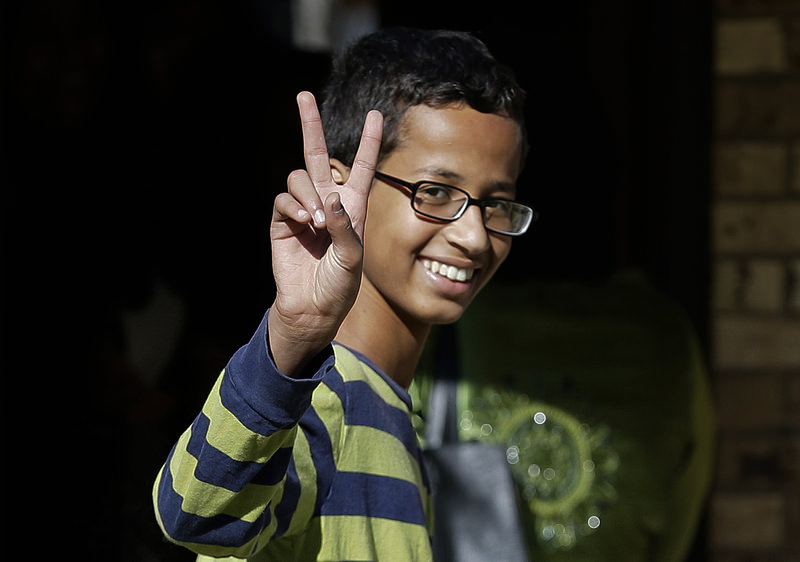 by Compiled from Wire Services Oct 20, 2015 12:00 am
Ahmed Mohamed, the Muslim teenager arrested after a homemade clock he brought to his Texas school was mistaken for a bomb, capped a whirlwind month with a visit to the White House on Monday.

Ahmed got a personal invitation from President Barack Obama for "Astronomy Night." The two met and chatted briefly during Monday night's event. The president uses the event to encourage students to pursue careers in science, technology, engineering and mathematics. Earlier Monday, Ahmed said he was grateful for the president's support and said he's OK with the nickname that so many have given him over the past few weeks, "clock kid."

He said the lesson of his experience is: "Don't judge a person by the way they look. Always judge them by their heart."

Last month, Ahmed brought the clock to his high school in Arlington, Texas, to show a teacher, but another teacher thought that it could be a bomb. The school contacted police, who ultimately chose not to charge Ahmed with having a hoax bomb, though he was suspended from school for three days.

Obama subsequently tweeted an invitation to Ahmed and said the United States should inspire more kids like him to enjoy science. Ahmed's family is looking at several options for a new school. He hopes to eventually go to the Massachusetts Institute of Technology and become an engineer.

Ahmed said he has visited Google and Facebook, along with other companies and institutions in recent weeks. He also traveled to Sudan where he met with President Omar al-Bashir, which has prompted some criticism because al-Bashir is wanted by the International Criminal Court on charges of genocide and war crimes for atrocities linked to fighting in Darfur province.

Ahmed posed for pictures with NASA astronaut Alvin Drew shortly before Obama addressed the students on the South Lawn, and he got to introduce himself to the president when Obama waded out toward the audience to shake hands with visitors after his speech.

The Sudanese-American's story attracted worldwide attention on social media last month, and Obama even tweeted an invitation for the 14-year-old to visit the White House and show off his invention. Ahmed's arrest took place at a time when rising Islamophobia has exacerbated the debate around religious freedom in the U.S. His arrest was widely criticized and charges against him were eventually dropped.
Last Update: Oct 20, 2015 3:05 pm
RELATED TOPICS