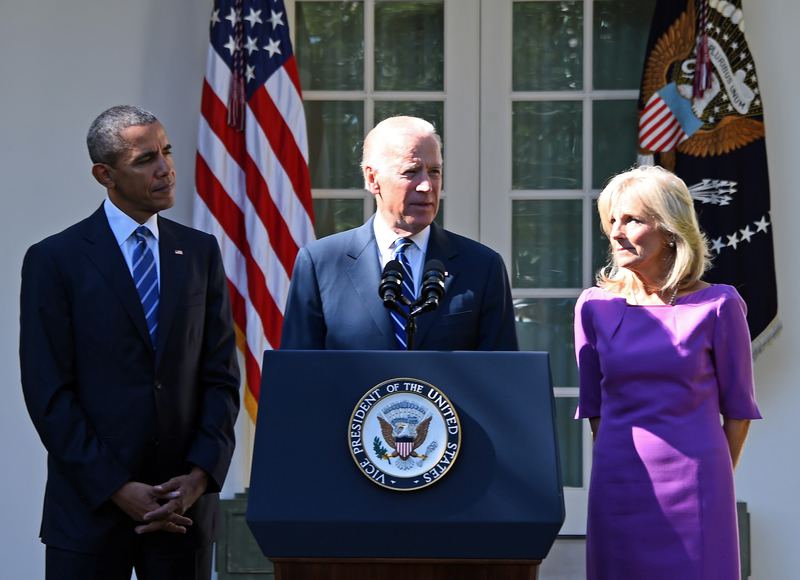 by reuters
Oct 21, 2015 12:00 am
U.S. Vice President Joe Biden said on Wednesday he would not seek the Democratic nomination for president in 2016, ending months of suspense and removing a huge political obstacle for front-runner Hillary Clinton.

"While I will not be a candidate, I will not be silent," Biden told reporters in the White House Rose Garden with President Barack Obama and Biden's wife Jill at his side.

In deciding not to run, Biden, 72, appeared to succumb to his own doubts about whether he and his family were ready for a grueling campaign while still mourning his son Beau, who died of brain cancer in May. His son had urged him to run.

Clinton's slipping poll numbers had cracked open a door to a late bid by the affable Biden, leading to calls from his supporters to seek the presidency.

But what was widely hailed as a command performance by Clinton in the Oct. 13 Democratic debate turned the tide back in her favor and quieted talk that she was vulnerable in her quest for her party's nomination for the November 2016 election.

Clinton's support among Democrats surged by 10 percentage points after the October debate, a recent Reuters/Ipsos poll showed. She had the backing of about 52 percent of poll participants, followed by Sanders at 27 percent. Biden's support, at 13 percent, was down 6 percentage points.

Biden had run for president twice before and was a U.S. senator from Delaware for more than three decades. Biden is popular with white, working-class voters, and he could still play a major role in the election if he chooses to endorse a Democratic candidate.

Biden ran for president in 1988 and 2008, both times dropping out early in the race.

He has been prominent for a vice president, with broad involvement in many of President Barack Obama's foreign affairs decisions, such as the withdrawal from Iraq and his Afghanistan strategy.

Biden once boasted that he had "met virtually every major leader in the world."

He became something of a secret weapon for the White House on Capitol Hill, stepping in to negotiate tricky fiscal deals with Republican lawmakers.

Biden, who is Roman Catholic, won praise from human rights groups for saying in May 2012 that he was "absolutely comfortable" with same-sex marriage. Many observers credited his comments for pushing Obama to announce his support too.

In Biden's long Senate career, he served as chairman of the Foreign Relations Committee. He also pushed for the Violence Against Women Act, which toughened penalties for sex offenders and created protections for victims.