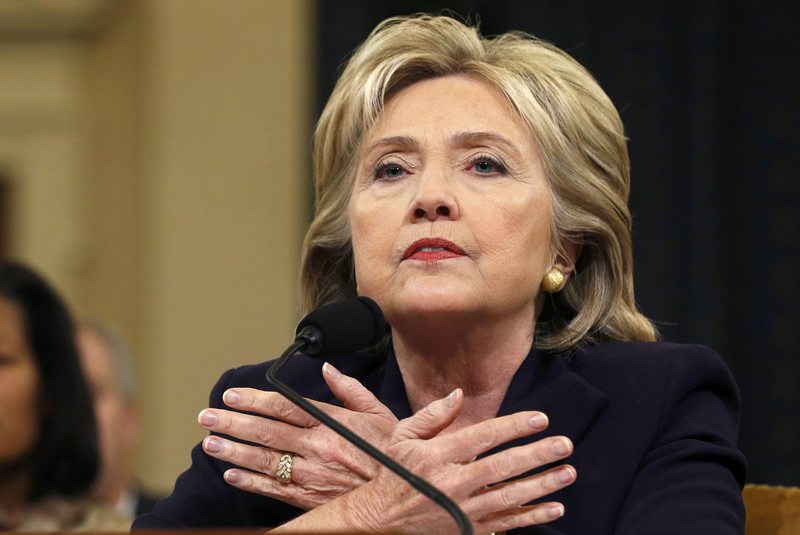 by Associated Press Oct 22, 2015 12:00 am
Hillary Rodham Clinton firmly defended her actions on Benghazi as she came face-to-face Thursday with the Republican-led special investigation of the 2012 attacks on a U.S. diplomatic mission in the Libyan city, hoping to put to rest the worst episode of her tenure as secretary of state and clear an obstacle to her presidential campaign.

Democrats have assailed the investigation as a ploy to derail Clinton's White House bid, noting that it is the eighth congressional investigation into the attacks.

The hearing comes at a moment of political strength for Clinton, the front-runner for the Democratic nomination. On Wednesday, a potential rival for the nomination, Vice President Joe Biden, announced he would not join the race. Clinton also is riding the momentum of a solid debate performance last week.

Contentious moments during the hearing included questions and accusations about the Obama administration's shifting early public account of the Sept. 11, 2012 attacks, which killed four Americans including the first ambassador in more than three decades.

Republicans pressed for answers on her record in the lead-up to the attacks on the diplomatic outpost in Benghazi and a nearby CIA compound, and how engaged she was on the deteriorating security situation in eastern Libya. The atmosphere remained mostly civil until a fiery back-and-forth with Rep. Jim Jordan, who accused Clinton of deliberately misleading the public by linking the violence to an Internet video insulting the Muslim Prophet Muhammad.

Clinton said only that "some" people had wanted to justify the attack based on that video and that she rejected that justification. The argument went to the origins of the disagreement over Benghazi and how President Barack Obama and his top aides represented the attack in the final weeks of his re-election campaign.

"There were probably a number of different motivations" for the attack, Clinton said, describing a time when competing strands of intelligence were being received and no clear picture had yet emerged. Speaking directly to Jordan, she said: "The insinuations that you are making do a great disservice."

Beyond that exchange, however, there were no gaffes for Clinton and few contentious exchanges. She never raised her voice as she did at a Senate hearing on Benghazi in January 2013.

Rep. Trey Gowdy of South Carolina started the hearing with a series of questions that he said remained unanswered: Why was the U.S. in Libya, why were security requests denied, why was the military not ready to respond quickly on the 11th anniversary of 9/11 and why did the Obama administration change its story about the nature of the attacks in the weeks afterward?

She stressed a need for diplomats to advance U.S. interests in the world, even in dangerous places, and said perfect security can never be achieved.

The U.S. military campaign against Moammar Gadhafi in 2011 helped prevent "genocide," Clinton asserted, noting the Libyan dictator's threat to hunt down opponents like "cockroaches." The American-led intervention came after requests for assistance from allies in Europe and the Arab world, and extensive study and discussion by the U.S. government, she said.

The Republican criticism has included contentions by some lawmakers that Clinton personally denied security requests and ordered the U.S. military to "stand down" during the attacks, or that her agency was engaged in an elaborate gun-running scheme in eastern Libya. None of these were substantiated in an independent ordered by Clinton after the deadly incident, and seven subsequent congressional investigations.

Gowdy is engaged in his own balancing act, portraying the panel as focused on the facts after comments by fellow Republicans describing the inquiry as an effort designed to hurt Clinton's presidential bid.

On Thursday, Democrats on the panel immediately focused on several, long-debunked allegations regarding the response of Clinton and the Obama administration to the series of attacks on the U.S. diplomatic outpost in Benghazi and a nearby CIA compound. Although Republicans pressed for answers, there were no confrontations with Clinton in the early rounds of questioning.

The hearing was expected to last the whole day, with breaks. Clinton was certain to face questions about her use of a private email account and server while serving as President Barack Obama's chief diplomat, another issue that has beset her campaign.

A new Associated Press-Gfk poll shows the public mixed on Clinton and Benghazi. Four in 10 say they neither approve nor disapprove of how she has answered questions about the attack, while 20 percent approve and 37 percent disapprove.

Americans also are divided on Clinton's email practices, which have raised security concerns. More than half of those polled view her use of a private server as a minor problem or no problem at all, compared with 1 in 3 who think it is a major problem. Nearly two-thirds of Republicans call it a major problem.

In the weeks after Benghazi, Clinton took responsibility for the incidents. In recent months, she has said her use of a private email server was a mistake.