Hillary Clinton turns Benghazi trial into plus for bid 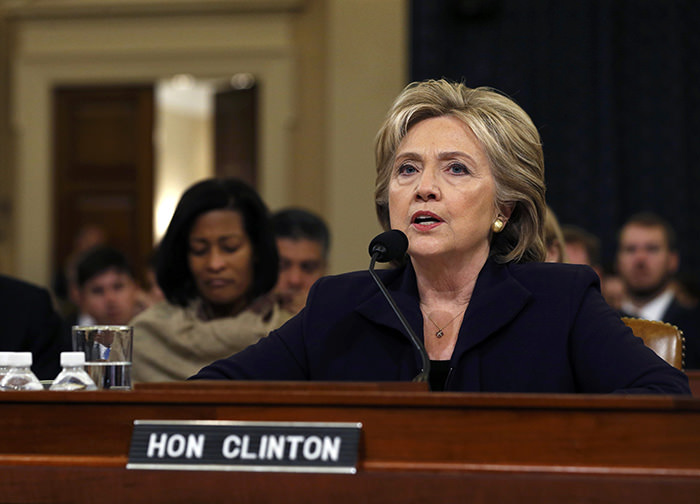 Democratic presidential candidate Hillary Clinton testifies before the House Select Committee on Benghazi, on Capitol Hill in Washington October 22, 2015 (Reuters Photo)
by Associated Press Oct 23, 2015 12:00 am
Hillary Rodham Clinton turned an 11-hour congressional grilling into a campaign call to action on foreign policy, using a make-or-break appearance before the Republican-led Benghazi committee to display a commanding, presidential presence under a barrage of questions.

For months, Clinton's campaign had flagged Thursday's hearing before the House panel investigating the September 2012 attack at the diplomatic outpost in Benghazi, Libya, in which four people were killed, including Ambassador Chris Stevens as a key hurdle for a candidate.

While the hearing likely did nothing to change the minds of Republicans or other voters who already distrusted and disliked Clinton, there were some early signs that it may have helped her solidify support within among Democrats, with some donors and activists who were backing other primary candidates pledging their support for her.

Clinton's hearing came at an important juncture in her campaign, a day after Vice President Joe Biden announced he would not challenge her for the party's nomination and a week after a solid performance during the first Democratic debate.

During Thursday's hearing, Clinton watched with a bemused smile as the committee's Republican chairman and top Democratic member heatedly argued about making public the panel's earlier private hearings. She repeatedly urged the lawmakers to honor the memories of the four Americans killed in the attacks.

"I will continue to speak out and do everything I can from whatever position I'm in to honor the memory of those we lost," Clinton said.

Republicans touched on a wide range of issues, from the U.S. role in Libya and how the Obama administration initially portrayed the attacks, to the dozens of emails Clinton received from longtime political confidant Sidney Blumenthal.

But the hearing surfaced little new information and landed no blows to Clinton's presidential aspirations, leaving Republicans without a memorable moment to promote as Clinton approaches the first primary contests.

In the moments after the hearing concluded, chairman Trey Gowdy struggled to explain what the committee and the American public learned from the marathon hearing.

"In terms of her testimony, I don't know that she testified that much differently than she has the previous times that she's testified," he told reporters gathered in the Capitol.

Rep. Jim Jordan revived questions about the administration's shifting accounts of what happened at the diplomatic outpost in Benghazi and nearby CIA compound, arguing that the White House was eager to avoid political damage from a terror attack less than two months before President Barack Obama faced re-election.

"I'm sorry it doesn't fit your narrative, congressman," Clinton said in response. "I can only tell you what the facts are."

Clinton's daylong testimony was unlikely to end Republicans' quest to use the heavily scrutinized Benghazi attack to question her judgment and leadership. Revelations that Clinton relied on personal email and a private Internet server during her tenure at the State Department have only heightened the Republicans' interest in determining whether more information exists about the attack that killed Stevens and three other Americans.

Clinton's competent performance was also unlikely to drastically affect her standing in the Democratic race, where she faces a challenge from Vermont Sen. Bernie Sanders. Nearly half of Democrats and a majority of independents said they don't have strong feelings about the Benghazi investigation, according to a new AP-GfK poll.
Last Update: Oct 23, 2015 3:43 pm
RELATED TOPICS