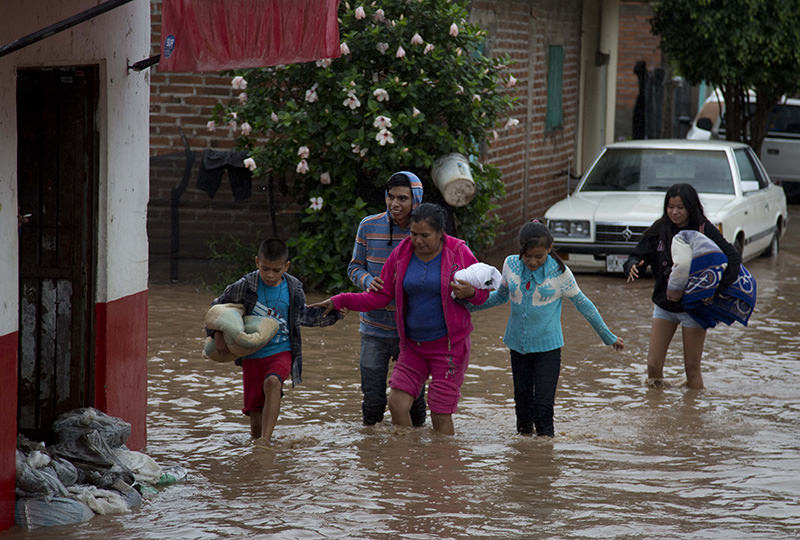 Residents walk along a flooded street in Zoatlan, Nayarit state, some 150 km northwest of Guadalajara, Mexico, Saturday, Oct. 24, 2015 (AP Photo)
by reuters Oct 25, 2015 12:00 am
Hurricane Patricia caused less damage than feared on Mexico's Pacific coast on Saturday, but hammered an isolated part of the shoreline dotted with luxury villas and fishing villages, where the storm and its 165 mph (266 kph) winds landed.

Thousands of residents and tourists fled the advance of the storm, one of the strongest in recorded history, seeking refuge in hastily arranged shelters.

There were no early reports of deaths and it appeared major damage was averted as Patricia missed tourist centers like Puerto Vallarta and the major cargo port of Manzanillo.

However, the storm carved through small rural villages, ripping corrugated metal roofing off modest brick homes and uprooting trees, with the forceful winds sucking the leaves off them.

"I've lost everything, I don't even have anywhere to sleep," said Roberto Gonzalez, a farmer, as he salvaged belongings from mangled debris of trash, toys and branches strewn across his hamlet of Chamela near the coast of Jalisco state, which took a direct hit.

His mattress was tossed about 20 feet (6 meters) away from his house. A hole gaped where his roof used to sit. Power lines were knocked down in some of the worst damage electricity board repairmen had ever seen.

Around three-quarters of some 50 modest homes in Chamela were wrecked. Residents had been evacuated to a shelter.

Phone lines remain down where the storm hit in the nearby settlement of Cuixmala, the site of one of Mexico's most exclusive getaways located between Manzanillo and Puerto Vallarta. It was unclear how bad the situation was there.

Flooding streets and battering buildings, Patricia hit land as a Category 5 hurricane on Friday evening before grinding inland. It moved quickly but lost power in the mountains that rise up along the Pacific coast and was downgraded to a tropical depression on Saturday as it headed through central Mexico.

Experts said the storm's speed meant it did not saturate the ground and trigger the major flooding feared. It was then broken up by high mountains, limiting the damage.

"The most important thing is that you are safe, that the menacing force of this hurricane could be faced and overcome and most importantly that you followed the recommendations of emergency services," President Enrique Pena Nieto said during a visit to Colima, which escaped the worst of the storm.

In Puerto Vallarta, where 15,000 tourists had been hastily evacuated on Friday night, hotel workers began sweeping up the debris and removing boards from windows as the sun peeked out of the clouds. The airport reopened to start ferrying tourists back home and buses crowded the streets.

Away from the more populated areas, residents described awaking to a scene of chaos after a terrifying night.

"We were sobbing, I thought everything was going to collapse around us," said Jose Angel Perez, 58, who sells coconuts in the municipality of Casimiro Castillo in Jalisco state, which lay in the storm's path. Whipping winds blew part of his roof away.

In its march north, Patricia was likely to make matters worse in Texas, which saw heavy rains overnight from a separate storm system that caused flooding powerful enough to knock over a freight train. Officials said moisture from Patricia would increase the intensity of rains swamping parts of the state by Sunday.

In Puerto Vallarta, most of the evacuated tourists had been able to return to their hotels on Friday night, officials said.

Patricia's edges brushed Manzanillo port, a main transit point for Mexico's car and mining exports. But there was no major damage and operations were set to resume on Saturday afternoon.

At one point generating sustained winds of up to 200 mph (322 kph), Patricia was the strongest hurricane ever recorded in the Western Hemisphere. Even though it lost some power before coming ashore, it was still a Category 5 storm, the strongest on the five-step Saffir-Simpson scale. Such storms are relatively rare and are capable of causing devastating destruction.

The hurricane's center hit land on Friday evening near the area of Cuixmala, the NHC said.

Founded by Anglo-French financier Sir James Goldsmith, the resort at Cuixmala has played host over the years to a colorful assortment of world leaders, musicians and eccentric billionaires.

Maria Pavon, a Cuixmala reservations booker based in the inland city of Colima, said there were no guests staying when the storm hit as they had all been evacuated. But there was no word yet on the state of the resort. She and colleagues had been unable to make contact as phone lines were down, Pavon said.

The area around Cuixmala is sparsely populated, but there are small towns, and it was not clear yet how much damage they had suffered.

Once inland, Patricia rapidly lost power. By Saturday afternoon, it had degenerated from a tropical depression into a remnant low with maximum winds down to about 30 mph (48 kph), the Miami-based Hurricane Center said.

Patricia was located about 45 miles (72 km) southwest of the city of Monterrey, heading northeast at 22 mph (35 kph), the center said.

It could, however, pose a flood threat, the NHC said.

Patricia became a tropical storm on Thursday and strengthened with stunning speed as it closed in on the Mexican coast. Meteorological authorities compared it to Typhoon Haiyan, which killed over 6,300 people in the Philippines in 2013.
Last Update: Oct 25, 2015 4:44 am
RELATED TOPICS