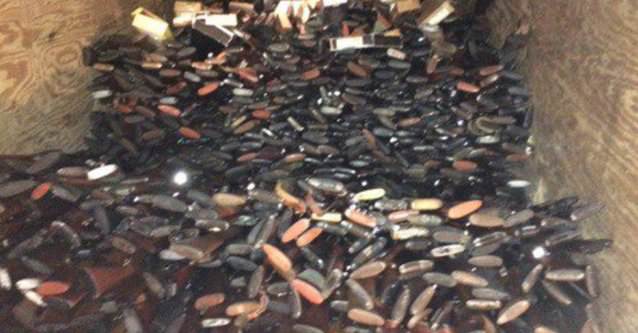 by Daily Sabah with Agencies Oct 27, 2015 12:00 am
Around 10,000 stolen firearms, hundreds of chainsaws were found in a South Carolina house in the U.S. as police arrived to deliver a subpoena to 51-year-old Brent Nicholson.

The police reportedly went to Nicholson's house located in the town Pageland near Chesterfield to deliver a subpoena related to his earlier drug charges and spotted chainsaws which had been reported stolen earlier. When they came back with a search warrant, they found approximately 7,000 to 10,000 stolen guns with most being shotguns and rifles, along with 500 chainsaws and four-wheelers.

More than 100 police officers arrived at the scene to count and classify the weapons and return them to their owners. Police units also investigated other premises belonging to Nicholson and his family, and reportedly found hundreds of weapons in a liquor store owned by Nicholson.

Nicholson will be charged of 'possession of stolen property', while police units stated that the 51-year-old did not likely steal the items himself, but rather bought them. It is not known whether he used the weapons, although the probability of Nicholson purchasing the weapons 'just for the sake' of owning them is high.
Last Update: Oct 27, 2015 5:49 pm
RELATED TOPICS