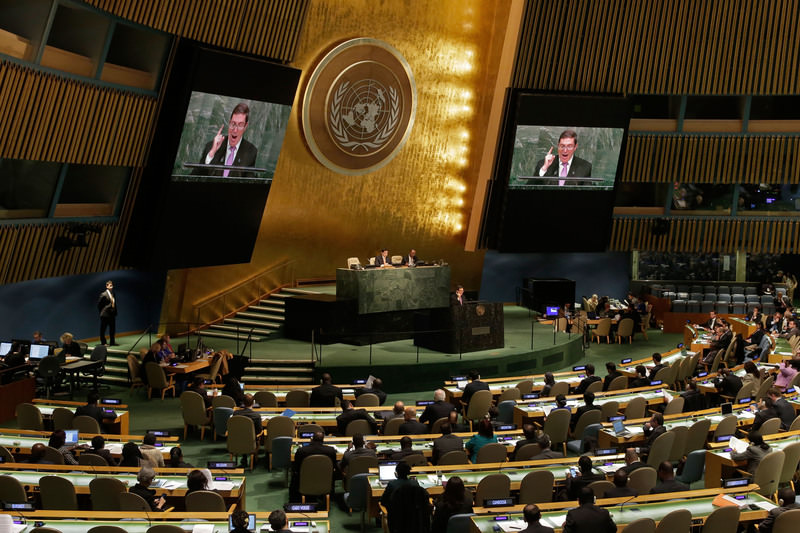 by Daily Sabah with AFP Oct 28, 2015 12:00 am
The UN General Assembly called Tuesday for an end to the US embargo on Cuba in a resolution adopted by a near-unanimous vote, three months after the United States restored diplomatic ties with Havana.

The United States and Israel voted against the non-binding resolution, but all 191 other countries of the 193-member assembly backed the measure.

The outcome was a diplomatic victory for Cuba, which is pushing for immediate action to ease the embargo, imposed in 1960 at the height of the Cold War.

"The lifting of the blockade will be the essential element that will give some meaning to the progress achieved over the past few months in relations between the two countries," said Cuban Foreign Minister Bruno Rodriguez.

But US diplomat Ron Godard warned that Cuba was "mistaken" if it believes the vote will put pressure on the United States.
"If Cuba thinks this exercise will move things forward in the direction that both governments have indicated they wish, it is mistaken," he said.

It was the 24th time that the annual resolution presented by Cuba was adopted by the assembly, but the measure garnered the highest level of support yet at the United Nations.

Last year, the United States and Israel had voted against the resolution and three countries -- the Marshall Islands, Micronesia and Palau -- had abstained.

The assembly has voted each year since 1992 to approve the resolution that highlights Washington's isolation over its Cuba policy.

This year's resolution welcomed the re-establishment of diplomatic ties and recognized President Barack Obama's "expressed will" to do away with the embargo.

The final decision rests with the US Congress, where the Republican majority has balked at the shift.

Rodriguez voiced hope that the US Congress "moves to change this inefficient, cruel and unjust policy, anchored in the past."
He stressed that Obama has "broad executive prerogatives to substantially modify" the embargo.

Cuba estimates that damage from what it terms a blockade amounts to more than $830 billion. It has long argued that the measure has brought hardship to the communist-ruled island.


Describing the resolution as "unfortunate," Godard said the United States could not support the text because it did not reflect "the significant steps taken and the spirit of engagement President Obama has championed."

The US senior adviser for western hemisphere affairs said normalization "will require years of persistence and dedication on both sides."

The United States and Cuba restored diplomatic ties in July after a five-decade stand-off, but they have yet to reopen trade and financial relations.

At the UN podium, envoys representing all major regional groups applauded the US shift toward Cuba but stressed that lifting the embargo was key to correcting what many view as a historical mistake.

South African Ambassador Kingsley Mamabolo, speaking on behalf of the G77 group of emerging economies, condemned the embargo as "the most unjust, severe and longest-lasting system of unilateral sanctions ever applied to any country."

The G77, China and the 120-nation non-aligned movement criticized the Obama administration for slapping 42 fines on US and foreign entities that do business in Cuba.

Venezuela's Ambassador Rafael Ramirez said the outcome of the vote showed the failure of US sanctions policy and sent a message to Washington to "stop its practice of claiming to be the world's police."

In Caracas, President Nicolas Maduro congratulated Cuba via Twitter for "another victory of truth and dignity."
Cuba's foreign minister said Havana will present the annual resolution for as long as the embargo persists.

In Cuba, state-run newspaper Granma's online edition announced: "The world gives a resounding NO to the blockade."
On the streets of Old Havana, some Cubans were disappointed by the US stance.

"It's very contradictory," said 44 year-old Ema Collado. "They can't say that the blockade will be lifted and then vote in favor of maintaining it."

Some were expecting the United States to vote in favor of the resolution, or at least abstain, as Obama publicly has dismissed the embargo as "failed policy" and a Cold War relic.

"I hope that they can hold a conversation, that everything is resolved, and that... there can be love between the two countries," said Enerolina Montalvo, 74.
Last Update: Oct 28, 2015 2:28 am
RELATED TOPICS