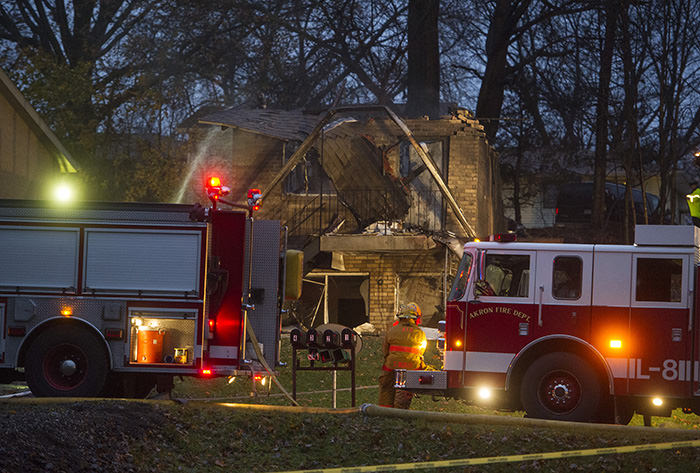 Firefighters work at the scene where authorities say a small business jet crashed into an apartment building in Akron, Ohio, Tuesday, Nov. 10, 2015 (AP Photo)
by Anadolu Agency Nov 11, 2015 12:00 am
At least nine people were killed Tuesday when a private jet crashed into a residential building in the mid-western state of Ohio, local media reported.

The Hawker H25 jet clipped electrical wires before plowing into a building in the city of Akron.

News website Cleveland.com reported nine people on board died, including two pilots, when the plane crashed into an apartment block at about 3 p.m. local time and engulfed the building in flames.

The plane passed though the brick building and hit an embankment behind. The building was empty at the time of the crash, police said.

The incident occurred as the plane was approaching Akron Fulton International Airport, about 3 kilometers (2 miles) from the crash site, according to the Federal Aviation Administration.

"Forces of the Akron Fire Department have worked to extinguish a massive fire created by the crash," Akron city authorities said in a statement. "Agencies responding have begun an investigation into all circumstances of the crash."
Last Update: Nov 11, 2015 10:34 am
RELATED TOPICS