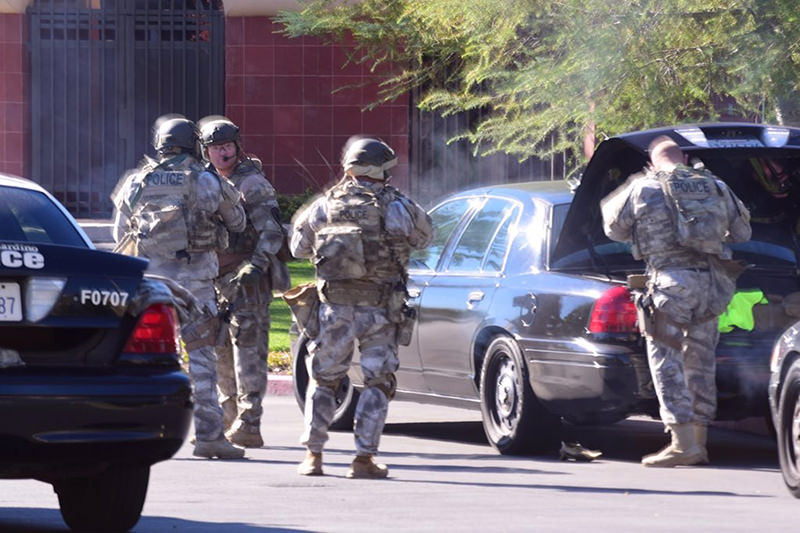 A swat team arrives at the scene of a shooting in San Bernardino, Calif. on Wednesday, Dec. 2, 2015 (AP Photo)
by Daily Sabah with AFP Dec 02, 2015 12:00 am
A heavily armed man and woman in their 20s died in a shootout with police after killing 14 people at a Christmas party in California in America's worst mass shooting in three years, authorities said.

Police identified the pair as Syed Farook, a 28-year-old U.S. citizen who worked for the Local County, and Tashfeen Malik, 27, whose nationality was unknown. They said the suspects were either married or engaged. Jarrod Burguan, San Bernardino's police chief, confirmed that both were dead, and that police no longer believed that a third suspect mentioned earlier was at large.

The shooters targeted a year-end party that was taking place at a social services center in San Bernardino, about an hour drive east of Los Angeles, killing 14 people and wounding 17 more. "We don't have the motive at this point," the police chief said. "We have not ruled out terrorism."
The massacre drew an angry response from President Barack Obama, who once again urged Congress to pass tougher gun control measures to stem America's epidemic of gun violence.

According to Burguan, Farook was an environmental inspector who had worked for the county health department for five years. He and Malik were dressed in military-style gear and carried assault weapons as they burst into the auditorium where the bloodbath took place. The hall was leased for the holiday party by the Inland Regional Center for the disabled. Burguan said Farook had attended the Christmas party organized by the health department and left after an apparent dispute, only to return a short time later with Malik, armed with assault rifles and semiautomatic handguns. "Based upon how they were equipped, there had to be some degree of planning that went into this," he said. "I don't think they just ran home and put on these tactical clothes, grabbed guns and came back on a spur of the moment thing." He said the attackers left explosive devices behind and authorities were only able to access the scene of the crime several hours after the shooting.

The California chapter of the Council on American-Islamic Relations (CAIR) denounced the killings. Farook's brother-in-law, Farhan Khan, said he had no clue what prompted the carnage. "I am in shock that something like this could happen," a visibly shaken Khan told a press conference organized by CAIR.

The Los Angeles Times quoted some of Farook's co-workers as saying he had previously traveled to Saudi Arabia and returned with a new wife. The couple had a six-month-old daughter and appeared to be "living the American dream," Patrick Baccari, a fellow inspector who shared a cubicle with Farook, told the paper.

It was the country's deadliest shooting since Dec. 14, 2012, when a young man killed 26 people, including 20 children, at Sandy Hook elementary school in Newtown, Connecticut. Witnesses at the California scene recounted barricading themselves in offices and hiding as the sound of gunfire erupted.

Mark Stutte said his daughter was attending the party organized by the county's public health department and called him terrified while hiding in a restroom as gunshots rang out in the background. "It was really, really super scary," he told local TV, as he wept. "I'm far away. I couldn't do anything for her."

Obama, who just last week made a plea for action on gun control after three people were killed at a family planning center in Colorado, voiced his anger once more. "The one thing we do know is that we have a pattern now of mass shootings in this country that has no parallel anywhere else in the world," he told CBS News. "There are some steps we could take, not to eliminate every one of these mass shootings, but to improve the odds that they don't happen as frequently."

Wednesday's shooting, which came less than a week after a gunman killed three people at a family planning center in Colorado, was certain to further stoke the bitter debate about gun control in the United States. This year, there have already been hundreds of mass shootings in the country. According to the site Mass Shooting Tracker, the latest attack brings the number of mass shootings to 352 so far this year. The U.S. has witnessed protests and debates surrounding race relations, law enforcement, criminal justice and gun control after racially charged attacks and shootings in the country. According to different polls, nearly half of Americans support stricter gun laws.
Last Update: Dec 03, 2015 3:59 pm
RELATED TOPICS