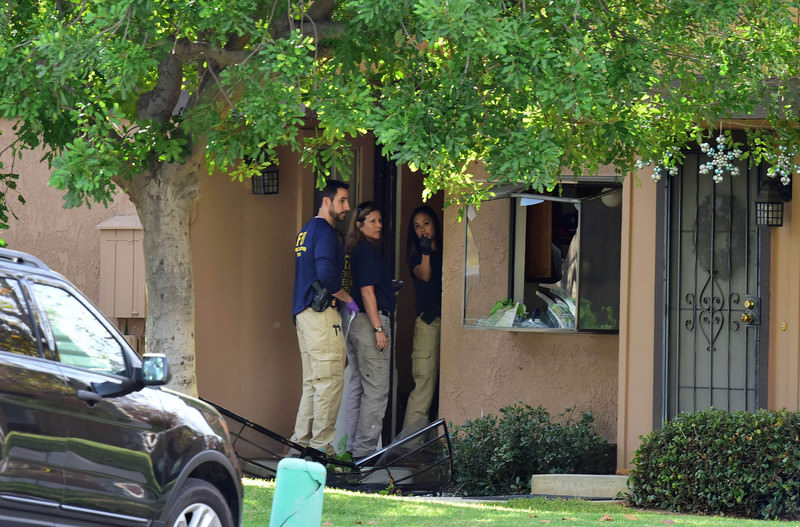 FBI agents investigate at a townhome in Redlands, California December 3, 2015, which is linked to the December 2 shooting rampage in California. (AFP Photo)
by Daily Sabah with DPA Dec 03, 2015 12:00 am
The search of a house rented by the couple suspected in the San Bernardino massacre produced a dozen bombs and close to 5,000 rounds of ammunition, police say.

"The search that took place revealed that there were 12 pipe bomb-type devises found in that house or in the garage to that house," San Bernardino Police Chief Jerrod Burguan says. "There were also hundreds of tools, many of which could be used to construct IEDs or pipe bombs."

In addition to "other material" that could have produced additional explosive devices, the house contained rounds mostly matching the 9-millimetre handguns and .223-calibre rifles that the husband and wife suspects are believed to have used in a shooting spree that killed 14 people and wounded 21, he says.


It was unknown if the couple planned further violence before they died outside their house in a shootout with police, Burguan says: "Clearly they were equipped and they could have continued to do another attack. We intercepted them before that happened, obviously."

On December 2 [Wednesday] heavily armed shooters targeted a Christmas party that was taking place at a social services center in San Bernardino, about an hour drive east of Los Angeles, killing 14 people and wounding 17 more.

Wednesday's shooting, which came less than a week after a gunman killed three people at a family planning center in Colorado, was certain to further stoke the bitter debate about gun control in the United States.

The U.S. has witnessed protests and debates surrounding race relations, law enforcement, criminal justice and gun control after racially charged attacks and shootings in the country. According to different polls, nearly half of Americans support stricter gun laws.