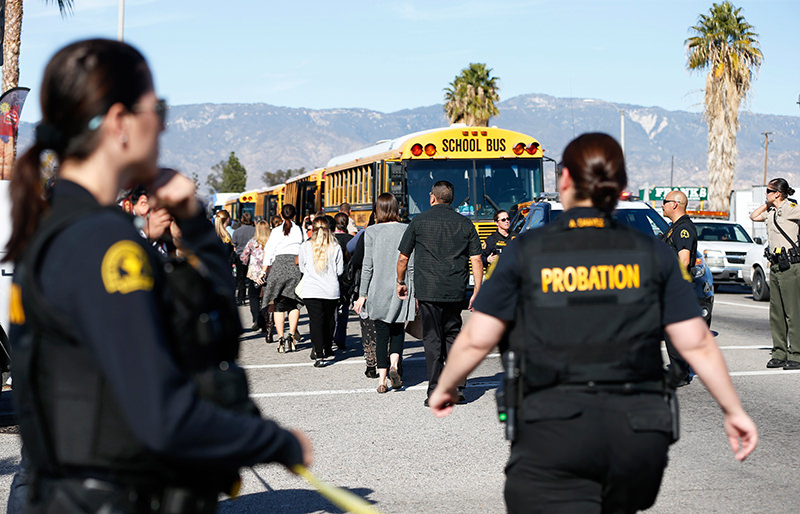 | Reuters Photo
by Dec 03, 2015 12:00 am
California's Muslim community expressed its horror on Wednesday at the mass shooting that killed at least 14 in San Bernardino, after a local Muslim man was widely identified as a suspect.

Syed Farook, a US citizen who worked for the town's health department, is believed to have been killed in a shootout with police hours after opening fire inside a Christmas party at a local social services center.

"The Muslim community stands shoulder to shoulder with our fellow Americans in repudiating any twisted mindset that would claim to justify such sickening acts of violence," he added in a statement.

Farook's brother-in-law, Farhan Kahn, came forward at the press conference to voice his shock at the notion his brother could have committed mass murder.

"I have no idea why he would do that," a visibly shaken Khan told reporters, adding that he had last spoken with Farook about a week ago.

"I am in shock that something like this could happen," said Khan, who is married to Farook's sister. "I am very sad that people lost their lives.

Muzammil Siddiqi, the religious director of the Islamic Society of Orange County, also condemned the killings saying they were contrary to the teachings of Islam.

"We have condemned all violence everywhere because human life is precious," he said. "And we respect and honor human life."

According to local news reports Farook was employed by the San Bernardino County health department which is believed to have organized the party at the Inland Regional Center.

The attack on the party triggered a massive manhunt that ended when police shot dead two heavily armed suspects -- a man, believed to be Farook, and a woman -- on a quiet residential street
Last Update: Dec 03, 2015 8:41 am
RELATED TOPICS