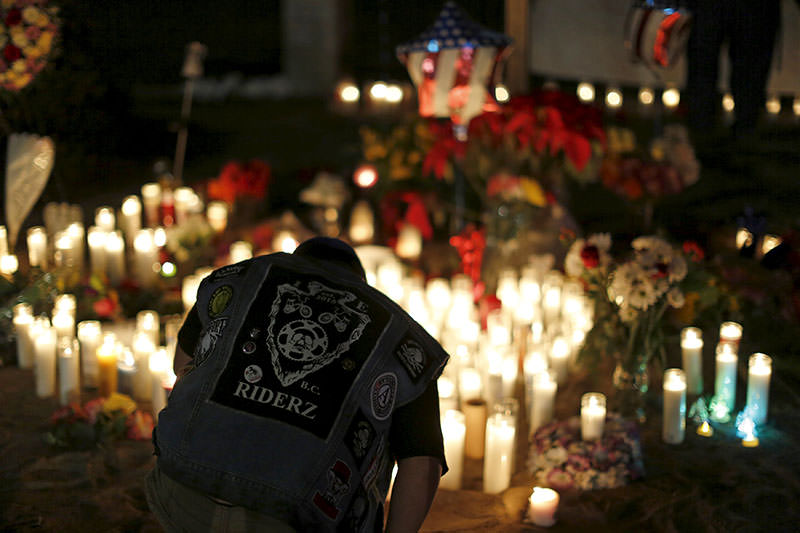 Aidan Solis, 11, kneels by a pop-up memorial in San Bernardino, California December 4, 2015 (Reuters photo)
by Compiled from Wire Services Dec 05, 2015 12:00 am
Daesh said in an online radio broadcast on Saturday that two followers of the group had carried out Wednesday's attack on a social services agency party in California in which 14 people were killed.

A heavily armed man and woman in their 20s died on Wednesday in a shootout with police after killing 14 people at a Christmas party in California in America's worst mass shooting in three years.

Police identified the pair as Syed Farook, a 28-year-old U.S. citizen who worked for the Local County, and Tashfeen Malik, 27, whose nationality was unknown. They said the suspects were either married or engaged.

The shooters targeted a year-end party that was taking place at a social services center in San Bernardino, about an hour drive east of Los Angeles, killing 14 people and wounding 17 more. "We don't have the motive at this point," the police chief said. "We have not ruled out terrorism."

The killings marked the deadliest mass shooting in the U.S. since the Sandy Hook Elementary School massacre in Connecticut in 2012, in which 26 people were killed, including 20 children.

There have been at least 351 mass shootings in the U.S. since January, according to ShootingTracker.com, a website that tracks news reports on shooting incidents.