US mosque threatened as Muslims under intense backlash 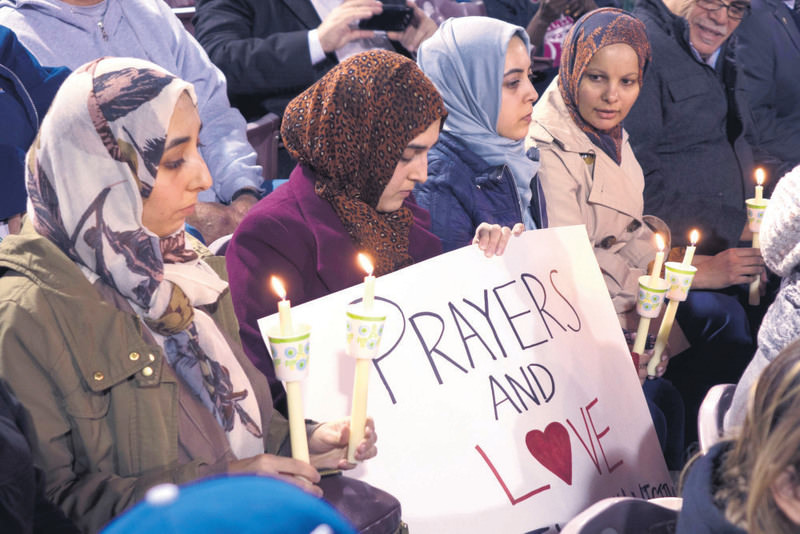 by Daily Sabah with AFP Dec 05, 2015 12:00 am
Members of the Arab and Muslim communities in the United States said Thursday they feared a backlash, as details emerged of the Muslim couple who shot dead 14 people in California."There absolutely is a fear that there could be a backlash and that's the reality we live in," said Abed Ayoub, legal and policy director for the American-Arab Anti-Discrimination Committee, a civil rights group that held the talks. Ayoub said that while there had been no reports of attacks in retaliation for the armed assault Wednesday by Syed Farook, 28, and his wife Tashfeen Malik, 27, it was essential for the community to remain vigilant.

"We need to stay cautious given the atmosphere and what happened in Paris a few weeks ago and the fallout from that," he said, referring to the terror attacks in France that left 130 people dead and were claimed by the extremist DAESH group. The FBI - who were scouring cell phones and a computer hard drive of the couple - had evidence that Farook had communicated with extremists domestically and abroad a few years ago, the Times said, citing congressional officials briefed on the investigation. Muslim leaders and residents in San Bernardino reacted to Wednesday's shootings at a social services center in the city with shock and disbelief. Several U.S. media outlets said law enforcement officials believe Farook had become radicalized and had contact with known terrorism suspects overseas.

Meanwhile, Al Jazeera reported that a mosque in Virginia received threats from a male caller, who reportedly said "he would do to worshippers at the mosque what had been done to the victims in San Bernardino." The website quoted the mosque's imam as saying the police is investigating the half-minute message forwarded to his personal phone. The imam told Al Jazeera that lack of awareness is the biggest reason of threats on Islam after such incidents as educated people already know that "Muslims are also the victims" of such violence.

Muslim officials in San Bernardino held a prayer vigil at a local mosque late Thursday to honor the victims and urged people not to link Islam with the attacks. The Council on American-Islam Relations (CAIR) also condemned the attack and spokesman Ibrahim Hooper added he and his team have been receiving lots of hate messages after the attack. Hooper added he expects another spike in Islamophobia and anti-Muslim attacks in coming days.

U.S. President Barack Obama, who ordered flags to be flown at half-staff until Monday, said a terror attack could not be ruled out but also cautioned against jumping to conclusions.

Gasser Shehata, 42, said he was convinced Farook's actions were linked to a work-related dispute - which is one line police are looking at - rather than his religious beliefs. "You can't believe he did that for the sake of Islam," he said. "He was calm, shy, reserved. I've never seen him disrespect someone. He was living the American dream, he was married, he had a daughter and last year he made $77,000. He had everything to be happy."

The American Civil Liberties Unions urged against blaming the country's Muslim community for Wednesday's carnage. "We musn't attribute the actions or characteristics of two individuals to an entire community," said Hector Villagra, the head of the ACLU in California. "The mourning in San Bernardino is an extension of the grief visited almost daily upon communities as a result of the mass shootings that have already claimed hundreds of lives so far this year."
RELATED TOPICS