Obama vows US ‘will not be terrorized' as DAESH praises shooters 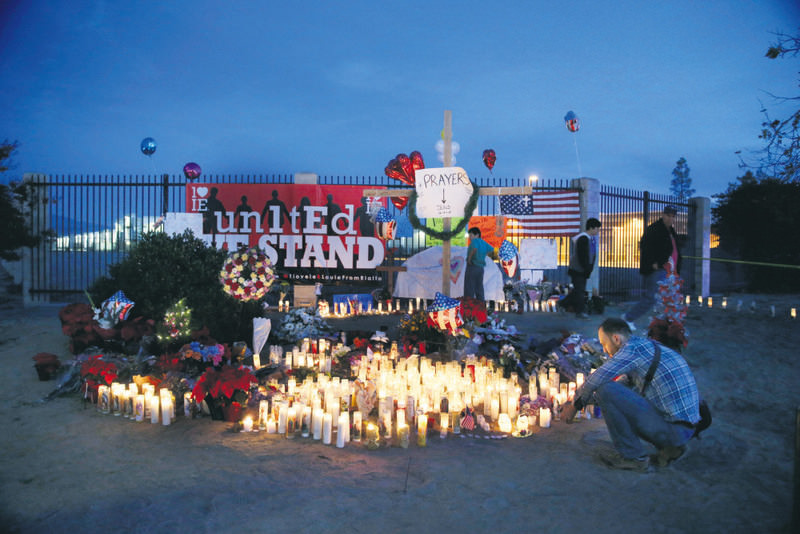 DAESH claimed the California shooters were followers and praised the attack as Obama declared that the U.S. ‘will not be terrorized.' Meanwhile, Islamophobic discourse intensifies amid the Syrian refugee debate

On Saturday, DAESH confirmed that the married couple who killed 14 people in a mass shooting in Southern California were its followers, and FBI agents raided a home, apparently belonging to a friend of the husband.

Obama declared that the United States "will not be terrorized," as DAESH praised the couple behind the mass shooting as "soldiers" of the extremist group. "We are Americans. We will uphold our values – a free and open society," Obama said in his weekly address. The U.S. president was also set to make a rare primetime address to the nation yesterday, laying out how he will keep Americans safe and defeat DAESH. Investigators are combing through evidence and investigating the background of Farook, and his wife Malik, since the pair opened fire on a social services center on Wednesday.

NBC News reported that the FBI had searched the home of Enrique Marquez, a friend of Farook's, who originally bought the assault rifles that were used in the shooting, but he is not considered a suspect. If the massacre is proven to be terror-related, it would be the deadliest such assault on American soil since the attacks on Sept. 11, 2001.

Top security officials have indicated that the couple had been radicalized but the White House and FBI say there are no signs that they were part of a larger group or terrorist cell. In an English radio broadcast, DAESH praised the two as "soldiers of the caliphate" and martyrs, but did not specifically say they were members of the group.

The heavily armed pair, who also wounded 21 in their attack, died in a shootout with police after a manhunt. The rampage was the worst the U.S. has seen in three years and revived the impassioned debate over gun control in a country where mass killings have become increasingly common.

The New York Times published a front-page editorial – the first since 1920 – calling for an end to "the gun epidemic in America." Authorities say Malik and Farook carefully planned their attack.

The assistant FBI director in charge of the Los Angeles office, David Bowdich, said investigators were investigating a Facebook post in which Malik is believed to have pledged allegiance to DAESH leader Abu Bakr al-Baghdadi, posted around the time of the attack.

The family's attorneys said that while the two were devout Muslims, there was nothing to suggest that they had become radicalized. Relatives have been at a loss to explain what triggered the killing spree, describing them as a quiet couple who kept to themselves. They had a 6-month-old daughter, whom they left with Farook's mother before the shooting. "How can he leave his only child, you know? And how could the mother do this?" Saira Khan, one of Farook's sisters, told The New York Times.

Washington has long warned of the threat of homegrown, self-radicalized extremists. "We have moved to an entirely new phase in the global terrorist threat and in our homeland security efforts," Homeland Security Secretary Jeh Johnson told the Times.

Donald Trump, the 2016 Republican presidential frontrunner, spoke defiantly about how he would deal with any terror threat from within. "I would handle it so tough, you don't want to hear," CNN quoted him as saying.

The president of Liberty University has urged students at the Christian school to carry concealed weapons on campus to counter any possible armed attack, saying that "we could end those Muslims before they walked in."

"Let's teach them a lesson if they ever show up here," President Jerry Falwell Jr. told students Friday. The call was met with rousing applause from students, but some said Falwell went too far when he appeared to be referring specifically to Muslims, the News & Advance reported.

"I've always thought if more good people had concealed carry permits, then we could end those Muslims before they walked in," Falwell said. He told The Associated Press on Saturday he was specifically referring to Syed Farook and Tashfeen Malik, the husband and wife who shot and killed 14 people at a holiday party in California on Wednesday.

Falwell told the newspaper, "There are many good Muslims, many good moderate Muslims." Falwell also told the AP he believed the campus needed to be prepared in the face of the increasing frequency of mass killings. He cited the 2007 killing of 32 people at Virginia Tech, the deadliest mass shooting in modern U.S. history. "What if just one of those students or one of those faculty members had a concealed permit and was carrying a weapon when the shooter walked into Virginia Tech? Countless lives could have been saved," he said. Falwell said he's decided to carry a gun after recent attacks.
RELATED TOPICS