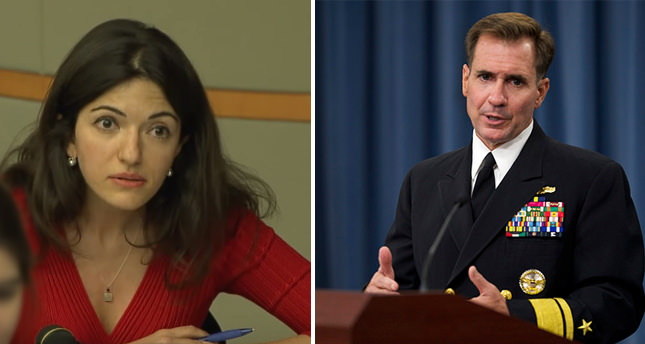 
Tensions between Washington and Moscow gave way to a fiery exchange at the State Department Thursday, with a spokesman accusing a Russian television journalist of asking "absolutely crazy" questions.

Spokesman John Kirby chided Gayane Chichakyan of state-backed RT for posing "absolutely ridiculous" questions as she persistently queried him about the US position on Turkey's military deployment in Iraq during the State Department's usually cordial daily briefing.

Having waited her turn, the reporter, who attends the briefing on a regular basis, repeatedly tried to discern whether or not Washington approved of the Turkish military presence in northern Iraq.

The State Department said this week that the two US allies should settle their differences directly and has refused to publicly take sides.

"You have to be looking at these questions and almost laughing to yourself, don't you?" Kirby said. "I mean, they're absolutely crazy."

When Chichakyan insisted that the United States seemed indifferent to the Turkish deployment in northern Iraq, which Ankara has defended as necessary to protect trainers at a base there, an exasperated Kirby stepped it up a notch.

"I notice that your team very rarely asks any tough questions of their own government," he said of RT, formerly known as Russia Today, an English-language news network backed by the Russian government.

"Here at the State Department, you can come in here and ask me whatever you want," Kirby added.

"And you can be just as challenging as you want to be and accusatory in your questions. Some of those today, absolutely ridiculous. You can do that here in the United States."

The reporter calmly countered: "Which of my questions was ridiculous?" before Kirby wrapped up the testy briefing.
Last Update: Dec 11, 2015 6:21 pm
RELATED TOPICS