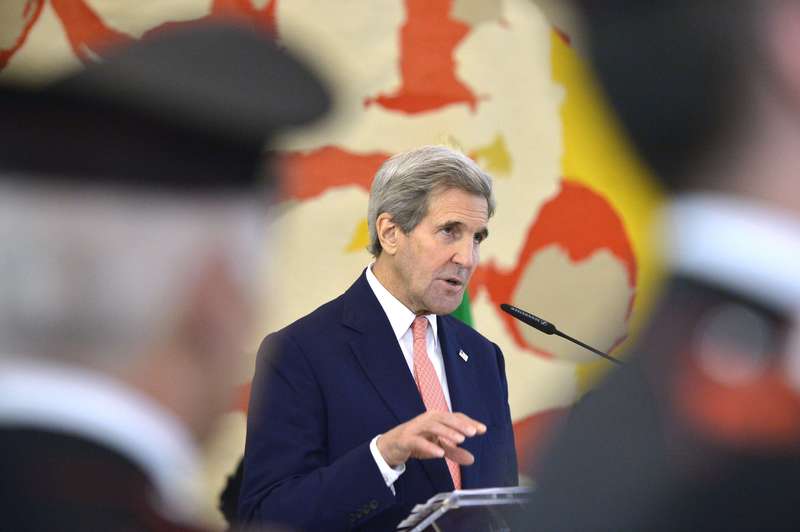 "To outright ban people, because they belong to one particular religion? That's just stunningly contrary to the fundamental values of our nation, which were built on tolerance," Kerry said in an interview with ABC's "This Week" program.

Trump called for the temporary ban earlier this week after a Muslim husband and wife killed 14 people in a shooting rampage in California that has been classified as a terrorist act.

The proposal, coming on the heels of other incendiary anti-Muslim remarks by the billionaire real estate tycoon, set off a firestorm both in the United States and abroad.

Kerry said Trump's call "does endanger national security, because it exhibits an attitude by one American who is running for the highest office of our land about a willingness to discriminate against a religion."

"It says to those in Islam who are trying to exploit people and recruit foreign fighters and otherwise, it says look, look at America. Here they've got a guy running for president who is waging war against Islam," Kerry said.

"It's exploitable, whether he intended it or not. And it allows for recruitment. It allows for America to seem like it is indeed discriminatory against Islam, against Muslims."

The chief US diplomat appeared on the television talk shows a day after envoys from 195 nations approved a historic agreement in Paris to curb global warming.

Kerry said it was clear from his exchanges with other diplomats in Paris that Trump's anti-Muslim comments were damaging to US foreign policy.

"I think it's got a huge downside in terms of American foreign policy and I hear this from foreign ministers and others as I travel and engage with people in various countries," he said on CBS.
Last Update: Dec 13, 2015 8:01 pm
RELATED TOPICS