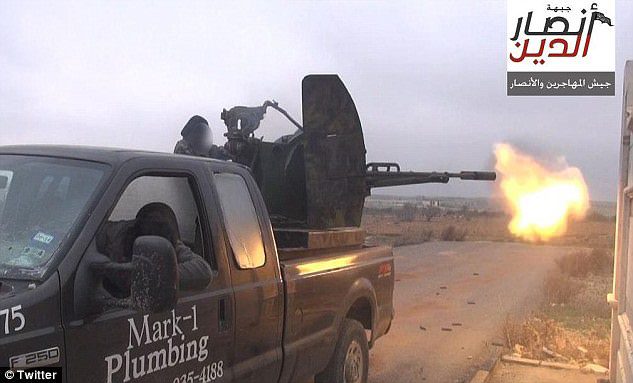 by Dec 15, 2015 12:00 am
A Texas plumber whose truck ended up in the hands of militants in Syria is suing the dealership he sold it to after a photo of the pickup with a flaming anti-aircraft gun in the bed and his logo on the door went viral.

Mark Oberholtzer said his company has received thousands of angry and threatening phone calls since a photo of the Ford F-250 pickup truck was posted on Twitter in December last year by a member of a terrorist group operating near Aleppo.

The expletive-filled calls were so disturbing that Oberholtzer shut his business down and stayed away from his home in Texas City for more than a week, according to a lawsuit filed in Harris County last week.

Oberholtzer also began carrying a gun after agents from Homeland Security and the FBI warned that he needed to "protect himself" because "there are crazy people out there."

He is seeking more than $1 million in compensation for the damage to his business and reputation.

The lawsuit claims that a salesman at Autonation Ford Gulf Freeway in Houston stopped Oberholtzer from peeling the decal off the door when he traded the old truck in for a new one.

The salesman allegedly said he was concerned Oberholtzer would damage the paint and explained he had something that would do a better job of removing the decal.

The decal with his business name and phone number was not removed before it was sold.

Oberholtzer said his firm Mark-1 Plumbing received over 1,000 phone calls in the first day after the photo went viral.