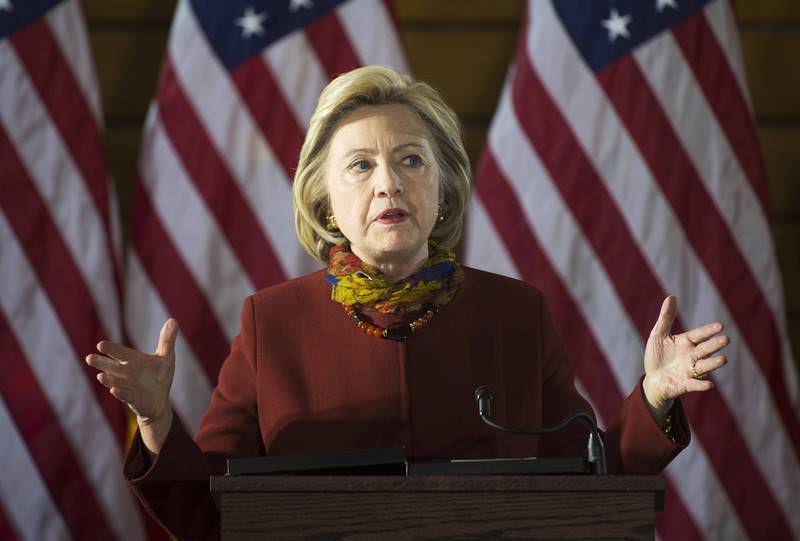 by Daily Sabah with AP Dec 16, 2015 12:00 am
Democratic presidential front-runner Hillary Clinton said Tuesday that the American people "cannot give into fear" in the aftermath of attacks in Paris and California, laying out a multi-pronged strategy to protect the homeland and prevent domestic terrorist attacks.

Clinton assailed her Republican rivals shortly before their latest presidential debate, telling an audience at the University of Minnesota that another ground war reminiscent of conflicts in Iraq and Afghanistan would play into the hands of the Daesh terrorist organization and fail to keep the U.S. safe.

"Shallow slogans don't add up to a strategy," Clinton said.

"Promising to carpet bomb until the desert glows doesn't make you sound strong, it makes you sound like you are in over your head," she added. "Bluster and bigotry are not credentials for becoming commander in chief."

Clinton sought to assure Americans that she would protect the homeland and prevent homegrown terrorists from sprouting following deadly attacks in Paris and San Bernardino, California, incidents that have thrust terrorism to the forefront of the presidential campaign. Much of her critique was aimed at Republican front-runner Donald Trump, whose call for a temporary ban on Muslims entering the United States has sparked debate around the globe.

Her strategy includes proactive steps for curbing Daesh recruitment in the U.S., especially online, and for stopping potential militants from training overseas. She also urged that the U.S. take steps to stop foreign fighters from entering the country, discover and disrupt plots before they can be carried out, work more closely with law enforcement agencies and empower Muslim-American communities.

"This is a 360-degree strategy to keep America safe," Clinton said. She also reiterated her support for new restrictions on guns, saying it was "time to restore the ban on assault weapons," a law first passed by her husband, former President Bill Clinton, which expired during the Bush administration.

She also emphasized a need for vigilance, stressing that the country needs to be prepared for more terror plots. Hours before her speech, officials in Los Angeles closed all schools after an emailed threat regarding a large-scale attack with guns and bombs a threat some law enforcement officials deemed a hoax.

As President Barack Obama's former secretary of state, Clinton holds direct ties to the White House's national security policies and has largely endorsed the president's approach to dismantling the Daesh. Like Obama, Clinton has said she would not send American ground troops to the Middle East, saying it would provide a recruiting tool for Daesh.

But Republicans view Obama's handling of foreign policy and terrorism as a weakness and have tried to link Clinton to the president's record, arguing that his policies in the Middle East allowed terrorist groups to flourish since the drawdown of troops in Iraq.

In Minneapolis, Clinton said Silicon Valley technology companies should redouble their efforts to identify the messages of violent extremists used to recruit followers. She said the U.S. and its allies around the globe needed to commit to better sharing of information about suspected terrorists and take steps to revoke the passports and visas of those who join the Daesh.

Clinton pointed to local efforts in Minneapolis-St. Paul to combat terror recruiting, particularly among its Somali population, the largest in the United States, and met with Muslim community leaders before her speech.

Authorities have said about a dozen Minnesota residents have traveled to Syria to join militant groups since late 2013, and several more have tried. Just last week, a ninth Minnesota man was arrested on a charge of conspiring to provide material support to the Daesh terrorists.

Somalis in Minnesota have tried to stop the recruiting with strong anti-terror messages and programs aimed at creating opportunities.

Makram El-Amin, an imam at a Minneapolis mosque, was among the Muslim and Somali community leaders who met privately with Clinton beforehand. He said that his community is seeking a partner, and stressed their concern about being categorized as anti-American because of the actions of a few.