US, Cuba agree to resume commercial air travel after 50 years 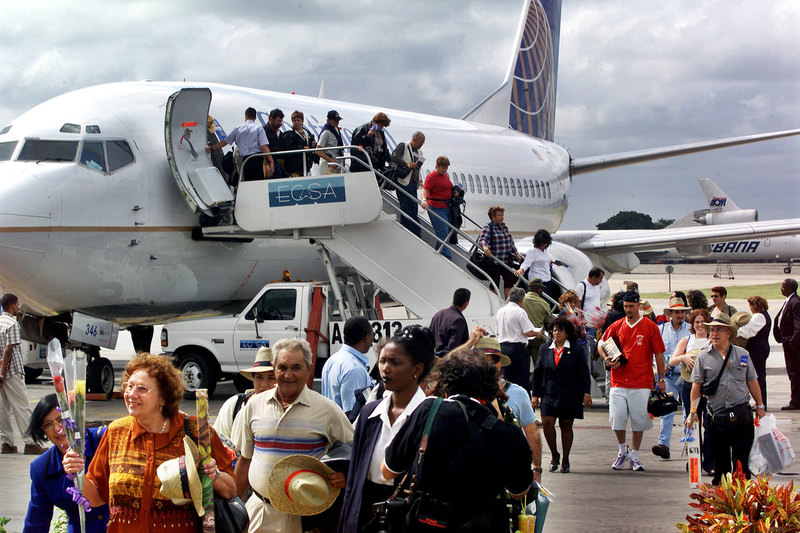 In this Nov. 1, 2001, file photo, the first passengers of the first flight of Continental Airlines from Florida, arrives at the Jose Marti Airport of Havana, Cuba. (AP Photo)
by Anadolu Agency Dec 17, 2015 12:00 am
The U.S. and Cuba have agreed to set up air links, the U.S. State Department announced Thursday.

As the Cold War foes observe the first anniversary of a rapprochement process the State Department said the move would increase "authorized travel, enhance traveler choices, and promote people-to-people links between the two countries".

However, Washington will maintain a ban on touristic activities to Cuba.

"While U.S. law continues to prohibit travel to Cuba for tourist activities, a stronger civil aviation relationship will facilitate growth in authorized travel between our two countries-a critical component of the President's policy toward Cuba," the department said.

In a statement, Obama said "important steps" had been taken to mend ties, including re-establishing diplomatic relations and opening embassies.

Describing the decades-long embargo on Cuba as a "legacy of a failed policy" Obama added that although the two countries had taken a number of steps "change does not happen overnight, and normalization will be a long journey".

The two leaders held a face-to-face meeting in April during a Summit of the Americas conference in Panama. The U.S. removed Cuba from the State Sponsors of Terrorism List in May.

Since then, the two countries have reopened embassies in each other's capitals and the U.S. has gradually eased sanctions on the island.

In September, Cuba appointed an ambassador to Washington but the White House is yet to name an envoy to Cuba.

While progress has been made, sharp differences remain between the two sides, including Washington's criticism of Havana's human rights record, and Cuba's desire to reclaim Guantanamo Bay, which the U.S. has been using as a military base and controversial prison to house detainees.
Last Update: Dec 17, 2015 10:35 pm
RELATED TOPICS