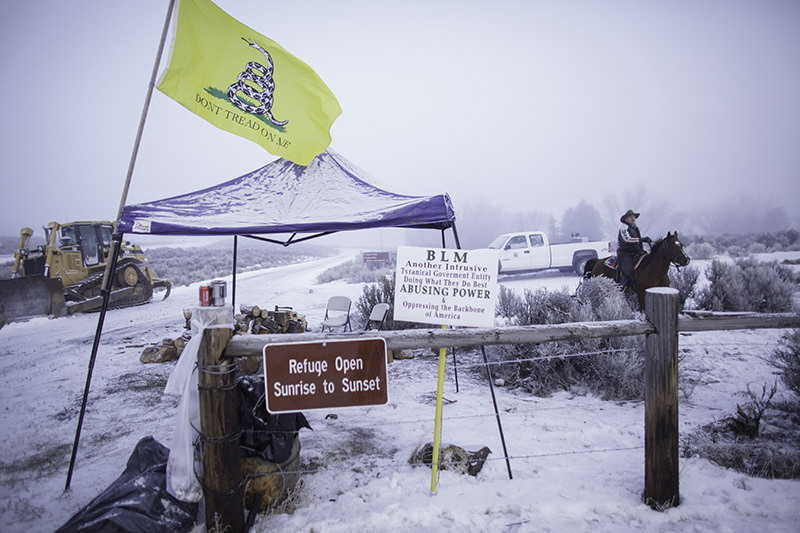 by Compiled from Wire Services Jan 09, 2016 12:00 am
Members of self-styled militia groups met on Friday with armed protesters occupying a federal wildlife refuge in Oregon, pledging support for their cause, if not their methods, and offering to act as a peace-keeping force in the week-long standoff over land rights.

During the 30-minute meeting at the Malheur National Wildlife Refuge, a leader of the occupation, Ammon Bundy, told about a dozen representatives of such groups as Pacific Patriots Network, Oath Keepers and III% that he had no immediate plans to abandon the siege. "I was asked to do this by the Lord," said Bundy, a Mormon, as some of the militia members nodded in understanding. "I did it how he told me to do it."
The loose-knit band of farmers, ranchers and survivalists -- who have dubbed themselves "citizens for constitutional freedom" -- began the siege in Oct. 2 in protest at the jailing of Dwight Hammond, 73, and his son Steven, 46, convicted of arson for setting fire 139 acres (56 hectares) of federal land in Harney County.

Dozens of protesters are believed to be holed up at the snowy visitor's center for the Malheur Wildlife Refuge, which they took over to show solidarity with the Hammonds, and demand that a court rescind an order for their arrest.

The FBI is was working with local law enforcement to bring a peaceful end to the standoff, after the protesters warned they did not rule out violence if authorities stormed the site.

The rancher father and son who triggered the armed siege have firmly distanced themselves from it, and on Monday turned themselves in to begin serving their five-year sentence.

The Oregon protest is led by a 40-year-old rancher named Ammon Bundy. His father, a Nevada rancher named Cliven Bundy, was at the center of a previous armed standoff with government authorities in 2014, that time over grazing rights on public lands. Bundy told reporters he was fighting for freedom for the Hammonds, saying they were harassed for refusing to sell their ranch to the government. But Bundy and his brother Ryan are also calling on the federal government to relinquish control of the Malheur reserve.

School was canceled in the area for the week, and the county courthouse was closed Monday "for security reasons."

Ammon Bundy met briefly with Harney County Sheriff David Ward on Thursday but rejected the lawman's offer of safe passage out of the state to end the standoff. During a press conference on Friday morning, Bundy seemed to soften his position, saying: "We will take that offer but not yet and we will go out of this county and out of this state as free men."

Following Bundy's press conference on Friday morning, a lands right activist opposed to the occupation spoke to the media. "This is about furthering an extremist right-wing agenda," Barrett Kaiser, a Montana resident and a representative of the Center for Western Priorities said, as supporters of Bundy tried to interrupt him and argue with him. "They need to be charged and prosecuted."

Local residents have expressed a mixture of sympathy for the Hammond family, suspicion of the federal government's motives and frustration with the occupation.

Federal law enforcement agents and local police have so far kept away from the occupied site, maintaining no visible presence outside the park in a bid to avoid a violent confrontation.

Earlier on Friday the Pacific Patriots Network called on its members to establish a safety perimeter around the refuge in remote southeastern Oregon to prevent a "Waco-style situation" from unfolding.

In 1993 federal agents laid siege to a compound in Waco, Texas, being held by the Branch Davidians religious sect for 51 days before the standoff ended in a gun battle and fire. Four federal agents and more than 80 members of the group died, including 23 children.

The Pacific Patriots Network has previously said that while it agrees with Bundy's land rights grievances, it does not support the occupation, a position leader Brandon Rapolla reiterated during the meeting. Bundy thanked Rapolla and handed him a small roll of bills, which he said came from donations.

"We're friends, but we're operating separately," Rapolla, a former Marine who helped defend the Bundys in 2014 in their standoff with the U.S. government at their Nevada ranch, told Reuters in an earlier interview. The militia members are not joining the occupation, but are sleeping in their vehicles or in hotels in Burns, he said.

Rapolla said he had also taken sausage McMuffins to FBI agents who are stationed at nearby Burns Municipal Airport to monitor the occupation and had coffee with deputies from the county sheriff's office on Thursday. The meetings were friendly, he said, and he told them that they were there to make neither side escalates the dispute.

"That's really the point of militias: it's community involvement," Rapolla said. "If something happens in your community, that's what militias are for."

Some two dozen armed protesters have occupied the headquarters of the refuge since last Saturday, marking the latest incident in the so-called Sagebrush Rebellion, a decades-old conflict over federal control of land and resources in the U.S. West.
Last Update: Jan 09, 2016 1:26 pm
RELATED TOPICS