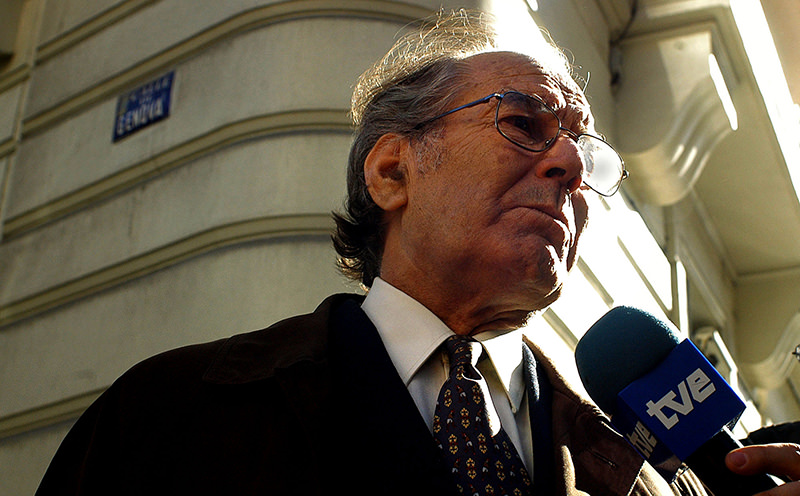 In this Feb. 21, 2005, file photo, Nobel Peace Prize winner Adolfo Perez Esquivel answers a journalist's questions at the Spanish National Court in Madrid, Spain (AP Photo)
by Associated Press Mar 03, 2016 12:00 am
In a sign of growing discontent over a visit by President Barack Obama, a former Argentine Nobel Prize winner says the U.S. leader should skip his planned March 24 visit to the country because it's the 40th anniversary of a coup that installed a military government that had U.S. backing.

Adolfo Perez Esquivel, who won the prize in 1980 for his defense of human rights during Argentina's 1976-1983 dictatorship, told The Associated Press that he plans to publish an open letter this week. Esquivel and Obama know each other through the Nobel Prize; Obama won it in 2009. Esquivel said the two had communicated before over human rights issues, including the indefinite detentions of prisoners at the U.S. naval base Guantanamo Bay.

Esquivel said he welcomes Obama, and thinks it's great that an American president wants to better get to know people in Latin America. However, he should not visit on March 24, Esquivel said. On that day in 1976, the military staged a coup. Human rights groups estimate that 30,000 people were killed or disappeared during the 1976 to 1983 military government.

"I'm a survivor of that era, of the flights of death, of the torture, of the prisons, of the exiles," said Esquivel, sitting in his office. "And when you analyze the situation in depth, the United States was responsible for the coups in Latin America."

Obama, after visiting Cuba, plans to arrive in Buenos Aires on March 23, and be in the country on March 24. Since the visit was announced several weeks ago, many human rights groups have voiced opposition to an American president being in Argentina on that day.

They argue that military governments across the region flourished thanks to backing by the U.S. during the Cold War with the Soviet Union. They point to declassified U.S. State Department documents that indicate Henry Kissinger, America's former secretary of state, gave his approval to the generals to implement "dirty war" tactics for the sake of civil order.

Argentine President Mauricio Macri, a conservative who ran on promises to improve relations with other nations, particularly the United States, has tried to dampen the controversy. He has met with human rights groups and argued that the visit won't take away from commemorative events. But activists have not been swayed.

Obama "is the false face of the Nobel Prize and we believe there are many things he should pay for," said Hebe de Bonafini, president of iconic human rights group Mothers of Plaza the Mayo. "We don't want him here."

The U.S. ambassador to Argentina, Noah Mamet, told the Clarin newspaper that Obama had to come on those days because they wanted to combine the visit with the trip to Cuba on March 21-22.

"The United States government shares with Argentina the defense of human rights as a universal principal," Mamet told the paper.

The U.S. Embassy did not respond to requests for more comment.