Mitt Romney calls Donald Trump 'a phony, a fraud, a misogynist', urges GOP to shun him 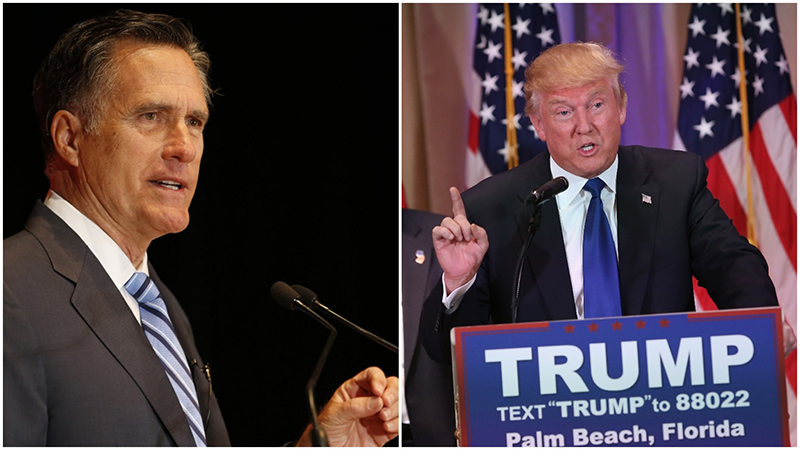 Mitt Romney called Donald Trump 'misogynistic, reckless fraud' who could destroy America. (AFP Photos)
by Mar 03, 2016 12:00 am
If Mitt Romney wanted to ignite a debate about the suitability of Donald Trump for the White House, he succeeded, at least on social media.

The 2012 Republican presidential nominee lambasted Trump in a speech on Thursday in Salt Lake City, calling him "a phony, a fraud" and saying that it is his "very brand of anger that has led other nations into the abyss."

The speech by the former Massachusetts governor was the latest illustration of how badly many mainstream Republican leaders want to stop Trump, currently the clear front-runner, from becoming his party's nominee in November's election to succeed President Barack Obama.

Twitter users were posting about Romney roughly 38 times per second following the speech, according to social media analytics firm Zoomph.

Romney's sentiment score, a measure of how positively users are discussing a topic, was slightly higher than Trump's following the speech, according to Zoomph.

"Mitt Romney" quickly became one of the top-trending topics on Twitter in the United States. As of 12 p.m. EST (1700 GMT), there were a total of 153,000 tweets about Romney on Twitter, according to the social media site's own metrics.

Trump did not immediately respond on Twitter, although shortly before Romney's speech he had tweeted that he was en route to a campaign event in Maine. His social media director, Dan Scavino, went promptly on the offensive.

In his speech criticizing both Trump's policy proposals and his style, Romney did not endorse any of the other candidates remaining in the Republican race.

But one of those candidates, Ohio Governor candidate John Kasich (@JohnKasich), tweeted his support for Romney, saying "Well said, @MittRomney."

A photo of the presidential Oval Office accompanied the tweet, with the caption "The One Who Works Here Should Make Us Proud."

"A brilliant speech by @MittRomney. No one can ever question his love for our party and our country. #TrueLeadership #MittRomney," Haley (@nikkihaley) tweeted.

Haley has endorsed Marco Rubio, a U.S. senator from Florida, for the Republican Party nomination.

Michelle Malkin, a conservative political commentator, said she was unimpressed with Romney's comments.

"If only Romney talked like this four years ago about Obama ... or Trump," Malkin (@michellemalkin) tweeted. "Too freaking late and too freaking lame."