Two US lawmakers call for louder Muslim voice in politics 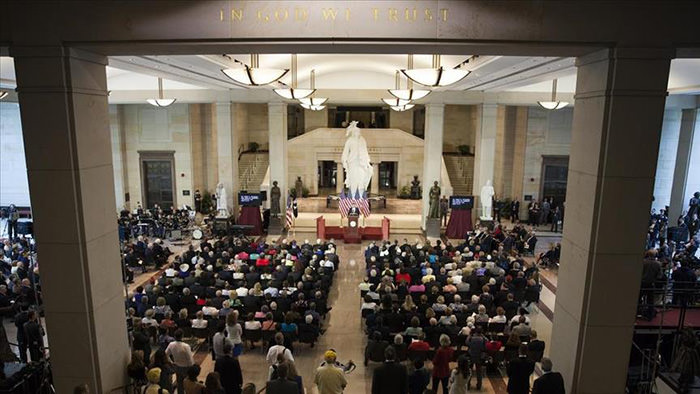 by Anadolu Agency Mar 03, 2016 12:00 am
The only two Muslim representatives in Congress called on their religious community on Wednesday to participate further in politics in the U.S.

"Despite everything Republicans say, the story of the American Muslim community is quite positive," Minnesota Rep. Ellison said.

He said that Muslims had contributed to America in many different sectors such as health, education and security sectors.

However, he added, despite its significant contributions to society, the voice of the Muslim community remained politically weak.

"We want each of you to run for politics," he said, suggesting that the best way to do that was to get involved at the state or county level.

He also said that, as Muslim members of Congress, they also had a responsibility to voice the contributions of the Muslim community.

Indiana representative Carson called on Muslims not to hide their identity. Rather, he suggested expressing it more openly in order to show that Muslims are a constitutive part of America.

Carson added that some Muslims considered it "haram" (forbidden, in the Islamic faith) to get involved in American politics.

"But after 9/11 we had no Muslim to represent us," he said. "Then we realized how important it was to have some people who could voice our concerns, or problems."

Given the anti-Muslim rhetoric orchestrated by certain Republican presidential candidates such as Donald Trump and Ben Carson, the Indiana representative said, Muslims should act responsibly and go to polls for the presidential primaries and for the election in November.

Real estate mogul Donald Trump had called to close off the country to Muslims.

"We don't have luxury to stay away from politics," Carson said, noting that Islam was the fastest growing religion in the U.S.

The Turkish Directorate of Religious Affairs sponsors the Center. The campus of the center includes a mosque with 16th Century Ottoman-style architecture, a community center, a library, an exhibition hall and an auditorium.

President Recep Tayyip Erdoğan is expected to visit the center later this month for its opening ceremony.
Last Update: Mar 03, 2016 10:49 am
RELATED TOPICS