US Sec. of State Kerry, Russian FM Lavrov hold talks on how to resolve Syria conflict 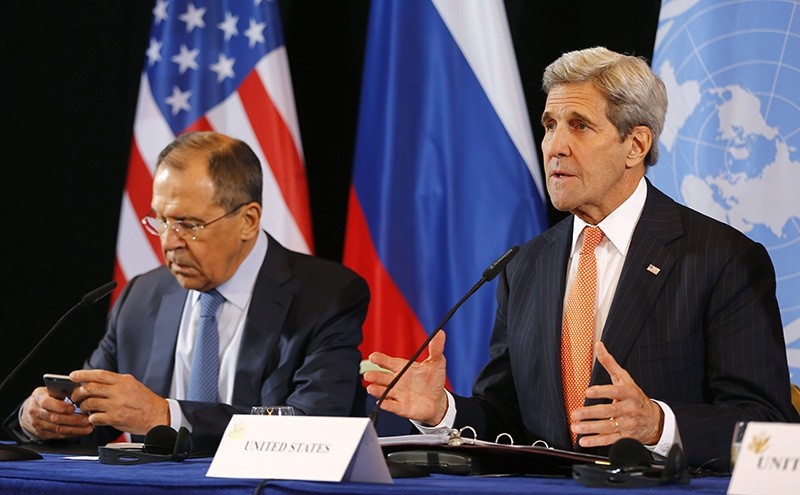 | AP Photo
by Jul 02, 2016 12:00 am
Russia and the United States held fresh talks on Saturday on ways of cooperating to end the five-year conflict in Syria as intensive Assad regime air strikes killed at least 30 civilians in a town northeast of Damascus.

Moscow and Washington are seeking ways of brokering an end to a conflict that has killed more than 400,000 people, according to the United Nations, and has sent a wave of refugees streaming towards Europe.

"They discussed ... the possibility of Russian-American cooperation in the fight against terrorist groups in Syria," the statement said.

The statement did not identify the groups more closely.

Russia, which supports Syria's Bashar al-Assad, is conducting airstrikes against various armed groups that are opposed to his rule including Nusra Front - an offshoot of al Qaeda - and Daesh which the Americans also oppose.

But Washington says Moscow is also targetting moderate opposition groups which are ideologically opposed to al Qaeda and which are supported by the United States.

Fighting continued unabated in Syria with intensive strikes by the Syrian air force on Jayrud, northeast of Damascus, which killed 30 civilians a day after the reported execution of a Syrian air force pilot, a monitor and moderate opposition said.

They said the raids targeted a medical centre, a school and a residential area in Jayrud, a heavily populated town that had been earlier spared heavy bombing after striking a local truce with the army. It had become in that time a sanctuary for thousands of civilians fleeing heavy battles nearby.

The UK-based Syrian Observatory for Human Rights said scores were also injured in the aerial strikes as well as by shelling from army posts in the area.

An opposition spokesman said the strikes seemed to be in revenge for the killing of the air force pilot who parachuted near the town after his plane crashed on Friday.

"The strikes against civilians are in retaliation against the execution of the pilot by Nusra Front," said Said Seif al Qalamoni from the Free Syrian Army's (FSA) Shahid Ahmad Abdo brigade that operates in Jayrud alongside the al Qaeda's Nusra Front and other groups.

The moderate opposition targeted a main army base in the region with Russian-made surface to surface missiles after the aerial strikes, al Qalamoni said.

Syrian state media said the crash was due to a technical fault and the pilot had ejected, while the rebel group Jaish al-Islam said it had shot down the plane, but did not say how.

Jaish al Islam said the pilot was arrested and was subsequently killed by a fighter from the Nusra Front while being held at a joint command centre.

Separately, Russian and Syrian planes intensified bombing on Saturday of a strategic rebel-held area of Aleppo that is near the only route into opposition-held parts of the northern city. If the Malah area were to fall to the army and its allies they would succeed in laying siege to areas where over 400,000 people live under rebel control.