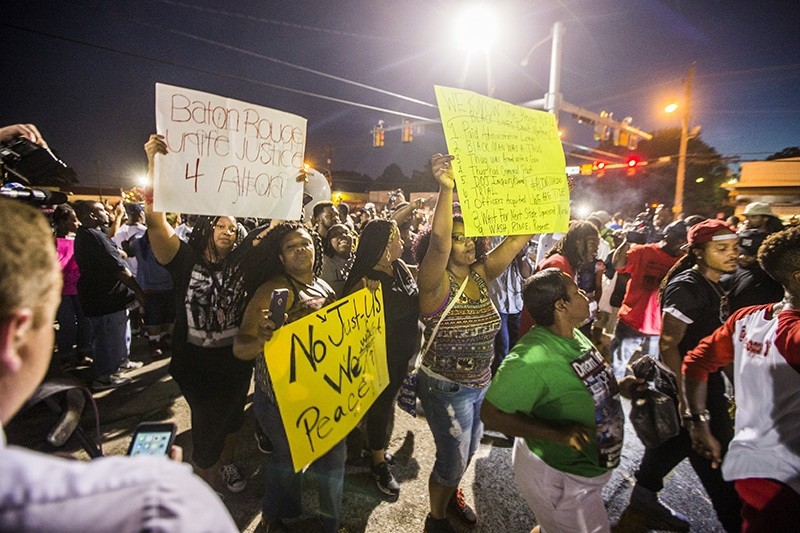 Protester march to the convenience store where Alton Sterling was shot and killed, July 6, 2016 in Baton Rouge, Louisianna.(AFP Photo)
by Daily Sabah with Agencies Jul 07, 2016 12:00 am

Hundreds were out on the streets on Wednesday, protesting the killing of Alton Sterling, a 37-year-old black man, by a white police officer, while the Democratic presidential candidate Hillary Clinton said there was something wrong with with America if people do not think they are being treated equally.

Sterling was shot early Tuesday as he wrestled with two police officers outside the convenience store where he sold music and movies on compact discs.

Cellphone video of the shooting posted online by a community activist set off angry protests, coming at a time when law enforcement officers across the country are under close scrutiny over what some see as indiscriminate use of deadly force against blacks.

Meanwhile, Democratic presidential nominee Hillary Clinton said that such incidents undermine trust between police and the communities they serve.

"The death of Alton Sterling is a tragedy, and my prayers are with his family, including his five children. From Staten Island to Baltimore, Ferguson to Baton Rouge, too many African American families mourn the loss of a loved one from a police-involved incident," she said in a statement.

"Something is profoundly wrong when so many Americans have reason to believe that our country doesn't consider them as precious as others because of the color of their skin," she added.

One officer shot Sterling five times at close range, and the other took something from his pants pocket as he was dying, according to images recorded by Abdullah Muflahi, owner of the Triple S Food Mart where Sterling was killed in the parking lot.

"I'm heartbroken. It's outrageous. It's crazy," said Muflahi, who considered Sterling a friend and allowed him to sell CDs outside his store. He provided a copy of the video to Reuters and said police took a gun from Sterling's pocket.

Several hundred people gathered for a prayer vigil near the spot where Sterling was killed, with speakers urging peaceful protests, justice and unity in the face of "excessive force" used by police against black residents.

"If we stand divided, we are already defeated," Bishop Gregory Cooper of Baton Rouge told the crowd, including families with children, that filled the parking lot and nearby streets. Police stayed on the fringes of the gathering.

Many people stayed hours after the service and a brass band joined a large, peaceful nighttime march circling the store. A local artist had painted a mural of Sterling on the wall just feet from where he was shot.

Officials scrambled to defuse tension, saying there would be an independent investigation, after media showed a separate graphic video of the shooting recorded by a bystander.

"I have very serious concerns. The video is disturbing, to say the least," Governor John Bel Edwards told reporters.

Baton Rouge Mayor-President Kip Holden and police said they welcomed the probe launched by the Justice Department, the Federal Bureau of Investigation and federal prosecutors.

Meanwhile, there was no immediate statement from presumptive Republican nominee Donald Trump.

In Baltimore, violent clashes took place between police and angry crowds on Baltimore's streets after the funeral of Gray, a 25-year-old black man who was fatally injured while in police custody.

Similar events took place in Ferguson, Missouri when Michael Brown, an 18-year-old African-American male, was shot dead after an altercation with Darren Wilson, a 28-year-old white male Ferguson police officer. Wilson was not indicted by a grand jury on any criminal activity in relation to killing Brown. During the Ferguson protests, many police officers and the demonstrators were injured.

According to the database of the U.S. daily Washington Post that keeps records of police shootings, Sterling is at least the 505th person fatally shot by police so far in 2016.

The database tracked 990 shootings in 2015, and this year's shootings have already surpassed the shootings compared with the same period compared to the last year.

Sterling is one of 122 black Americans shot and killed by police in 2016, of which some 10 percent of were unarmed at the time of the shooting, while about 61 percent were armed with a gun.

Video recorded on the bystander's cell phone shows an officer confronting Sterling and ordering him to the ground. The two officers then tackle him to the pavement, with one pulling a gun from his holster and pointing it at his chest.

Muflahi's video shows the officers on top of Sterling. One of them yells, "He's got a gun." The video jerks away from the scene after the first two shots are fired.

Three more shots are heard, before the camera shows one officer lean over Sterling and take something from his pocket.

Police did not say how many shots were fired and declined to say whether a stun gun was used on Sterling. Muflahi said police Tasered Sterling before he was tackled.

The officers were responding to a call about a black man reported to have made threats with a gun, Dabadie said.

"When officers arrived, Sterling was armed and the altercation ensued that resulted in the loss of his life," Dabadie said.

The body cameras of both officers became dislodged during the altercation, but continued recording audio and video, police said. Those and other recordings will be turned over to federal investigators, police spokesman Lieutenant Jonny Dunnam said.

Court records show Sterling had several criminal convictions since the mid-1990s, for battery, resisting arrest, burglary and other crimes. He was a registered sex offender after spending close to four years in prison for felony carnal knowledge of a juvenile.

Relatives and acquaintances described Sterling as jovial and friendly, a neighborhood fixture who had peddled copied CDs, DVDs and games in front of the Triple S Food Mart for years.

Cameron Sterling, Alton's 15-year-old son, broke down crying at a news conference as his mother spoke. "He was killed unjustly and without regard for the lives he helped raise," said the mother, who did not give her name.

Several people were arrested for blocking traffic in downtown Philadelphia during a protest over the killing, broadcaster NBC Philadelphia reported.