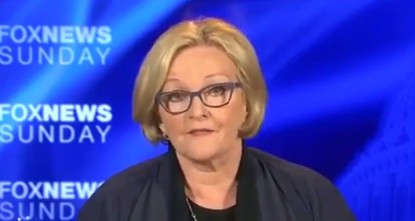 During an interview on "Fox News Sunday," McCaskill claimed that it was more likely for Trump to have close ties to DAESH than Obama, saying that Putin, whom she described as his "best buddy," supports Syrian dictator Bashar Assad.

"So you can say Trump and his friend Putin are the founder of ISIS [DAESH], which probably would be more accurate than calling out the commander in chief in that way," McCaskill said.

"Trump probably thinks the SOFA – the Status Of Forces Agreement – is a gilded couch at Mar-A-Lago, he probably doesn't even know what SOFA is. But that was a very relevant part of this. It is also important to realize that Assad, by what he did in his country allowed ISIS [DAESH] to move into Syria and get strongholds and recruit. That was the work and support of Putin, who is Trump's best buddy. So you could say Trump and his friend Putin are the founders of ISIS [DAESH], which probably would be more accurate," she said.

Trump claimed last week that Obama was the "founder" of DAESH. As Trump repeated the claim more than a dozen times, interviewers sought to ensure Trump wasn't being misconstrued. Surely, they offered, he meant Obama's policies had enabled the extremist group's rise.

"No, I mean he's the founder of ISIS [DAESH]. I do," Trump said. Then, he backed away from his comments and tweeted: "They don't get sarcasm?"

In a later speech, Trump said his Democratic opponent, Clinton, would be given "the most valuable player award" by DAESH. "Her only competition is Barack Obama," he said. He later added of Clinton, "Oh boy, is ISIS [DAESH] hoping for her."

Clinton's campaign accused Trump of "trash-talking" the U.S. while failing to present any serious counterterrorism plans of his own. Jake Sullivan, Clinton's top policy aide, called Trump's accusation a "false claim" and drew a connection to Russian President Vladimir Putin.

"Once again, he's echoing the talking points of Putin and our adversaries to attack American leaders and American interests," Sullivan said.

Trump has long blamed Obama and his former secretary of state, Clinton, for their Middle East policy. Republicans believe that the U.S. decision to leave Iraq in 2011 created a power vacuum that allowed al-Qaida in Iraq, a subsidiary of the larger al-Qaida terrorist group, to morph into the 30,000-strong DAESH group that in 2014 seized a third of Syria and Iraq.