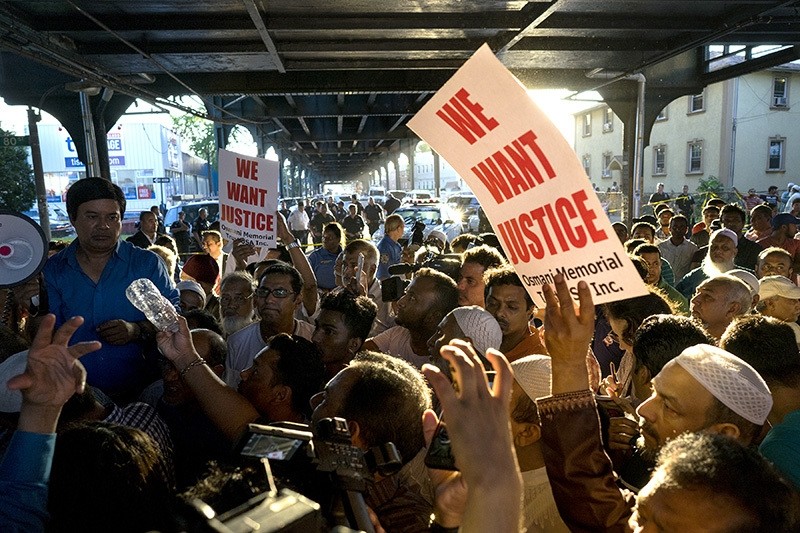 People gather for a demonstration Saturday, Aug. 13, 2016, in the Queens borough of New York, near a crime scene after the leader of a New York City mosque and an associate were fatally shot as they left afternoon prayers. (AP Photo)
by Associated Press Aug 14, 2016 12:00 am

Police in New York City are searching for the man who fatally shot the leader of a mosque and a friend as they left afternoon prayers, setting off fear and anguish among the community's Bangladeshi Muslim immigrants.

Although police said no motive had been established for the killing of Imam Maulama Akonjee, 55, and 64-year-old Thara Uddin Saturday afternoon near the Al-Furqan Jame Masjid mosque, community members worried the slayings could be rooted in intolerance.

The imam's daughter, Naima Akonjee, said her father — described by worshippers as a pious man who gave compelling readings from the Koran — didn't "have any problems with anyone."

She said the imam and Uddin were close friends who always walked together to the mosque from their homes on the same street.

Police said the men were shot in the head as they left the mosque in the Ozone Park section of Queens shortly before 2 p.m. They later were pronounced dead.

Sautner said video surveillance showed they were approached from behind by a man in a dark polo shirt and shorts who shot them and then fled with the gun still in his hand.

No arrests had been made by early Sunday.

Members of the Bangladeshi Muslim community served by the mosque said they want the shootings to be treated as a hate crime. More than 100 people attended a rally Saturday night and chanted "We want justice!"

The Council on American-Islamic Relations, an advocacy group, held a news conference near the shooting scene, where Kobir Chowdhury, a leader at another local mosque, said, "Read my lips: This is a hate crime" directed at Islam. "We are peace-loving."

Sarah Sayeed, a member of Mayor Bill de Blasio's staff who serves as a liaison to Muslim communities, attended the rally. "I understand the fear because I feel it myself," she said. "I understand the anger. But it's very important to mount a thorough investigation."

Letitia James, who as the city's public advocate serves as a watchdog over city agencies, said in a statement, "This violence is as alarming as it is senseless." She urged the police department to "vigorously" investigate the slayings.

Members of the community had felt animosity lately, with people cursing while passing the mosque, said worshipper Shahin Chowdhury. He said he had advised people to be careful walking around, especially when in traditional clothing.

He called the imam a "wonderful person" with a voice that made his Koran readings especially compelling.

Worshipper Millat Uddin said Akonjee had led the mosque for about two years and was a very pious man.

Naima Akonjee, 28, one of the imam's seven children, said she rushed to her parents' home after the shooting. She said her father was a caring man who would call her just to check up on whether she had eaten properly.

Neighbors also described Uddin as a pious and thoughtful man who prayed five times a day and went to the mosque. While at home, they said he would water his garden and one next door.

"A very honest, wise man ... (And) a very helpful guy," said neighbor Mohammed Uddin, who is not a relation of Thara Uddin's.