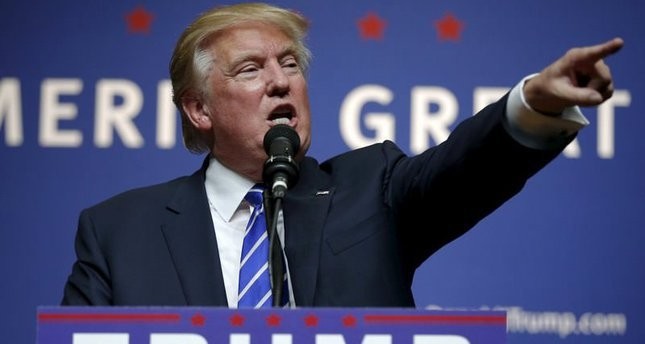 |Reuters Photo
by Daily Sabah with Agencies Aug 15, 2016 12:00 am
Republican presidential hopeful Donald Trump promised Monday to turn the page on U.S. foreign policy from nation-building to instead focus on destroying the Daesh terrorist organization.

"If I become president, the era of nation-building will be brought to a swift and decisive end," Trump said in a foreign policy speech in Ohio.

He blamed President Barack Obama and his would-be Democratic successor, Hillary Clinton, for allowing extremism to take root in the Middle East, pointing to Obama's withdrawal from Iraq and U.S. military intervention in Libya.

The hopeful, famous for his xenophobic and Islamophobic comments on the war-torn Middle East and Muslims around the world, accused Obama of failing to properly identify the enemy as "radical Islamic terrorists."

"We cannot always choose our friends, but we can never fail to recognize our enemies," Trump said.

At home he demanded new immigration screening, saying that the perpetrators of a series of attacks in the United States -- including the September 11, 2001, hijackings, the 2013 Boston bombings and the recent mass shooting in an Orlando nightclub -- involved "immigrants or the children of immigrants."

"We should only admit into this country those who share our values and respect our people," he ventured, promising to temporarily suspend immigration from "the most dangerous and volatile regions of the world" that export terrorism.

"In the Cold War, we had an ideological screening test. The time is overdue to develop a new screening test for the threats we face today. I call it extreme vetting."

On the home front he also proposed setting up a "commission on radical Islam" which would include "reformist voices in the Muslim community" to root out extremist networks and stop radicalization of young Americans.