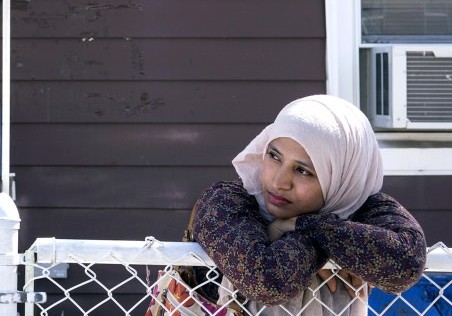 A woman rests on a fence outside the Al-Furqan Jame Masjid mosque in Queens, New York on Aug. 14, a day after a 55-year-old imam and his 64-year-old associate were shot dead after they left the mosque on Saturday.
by Daily Sabah with Wires Aug 16, 2016 12:00 am

As the families of a slain New York City imam and his assistant continue to try to find answers to the shooting, a Muslim advocacy group plans to announce a reward for information leading to an arrest

Imam Maulama Akonjee, 55, and Thara Uddin, 64, were both shot in the head near the Al-Furqan Jame Masjid mosque in the Ozone Park neighborhood of Queens as they left afternoon prayers on Saturday in their traditional religious attire, according to police.

"He always wants peace," Akonjee's son, Naim Akonjee, 21, said of his father through tears. "Why did they kill my father?"

The Council on American-Islamic Relations (CAIR) plans to announce on Monday a $10,000 reward for information leading to the arrest and conviction of the shooter.

A possible suspect was detained and questioned, but has not been charged, NBC News reported early on Monday, citing unnamed sources. A police spokesman could not confirm the report.

The police have yet to establish a motive and said there was no evidence the men were targeted because of their faith, but nothing has been ruled out. Residents have demanded that authorities treat the brazen daylight shooting as a hate crime.

Monir Chowdhury, who worshipped daily with the two men, said he had moved to the community because of its large Bangladeshi immigrant population, but in recent months had been harassed by people shouting anti-Muslim epithets.

In one incident, a man called him "Osama" as he walked to the mosque with his 3-year-old son. With the killer still on the loose, Chowdhury decided it would be best to drive to prayer services. "A lot of neighbors said, 'Hey, don't take your kid with you,'" he said. "People, they just hate us."

Millat Uddin, 57, an Ozone Park resident not related to the imam's associate, said both men were born in Bangladesh. He said he was close to Akonjee, describing him as a "docile, calm" father of seven who was beloved in the neighborhood.

"What matters most is harmless people have been shot dead, regardless of whether this was a hate crime," he said. "Our community's heart is broken."

Mohammed Ahmed, 22, works at his father's corner store on Liberty Avenue just two blocks from the shooting. He said he heard the shots while he was at work.

"It makes all the Muslims scared," he said. "Last time someone got shot in this neighborhood that I know of was probably 2001."

Police on Sunday released a sketch of the suspected gunman, a dark-haired, bearded man wearing glasses. He was described by witnesses as a man with medium complexion. A person who lives near the shooting scene shared with The Associated Press and other media organizations a surveillance video that showed a man walking up behind the imam and his associate, shooting them and then walking off. Police said they were reviewing the video.

In a statement on Sunday, New York City Mayor Bill de Blasio, a Democrat, said the slayings were felt by all New York City. "While we do not yet know the motivation for the murders of Maulama Akonjee and Thara Uddin, we do know that our Muslim communities are in the perpetual crosshairs of bigotry," the mayor said. "It remains critical that we work to bridge the divides that threaten to undermine the greatness of our city and country." An official with the government in Bangladesh condemned the killings on Twitter. The country's state minister for foreign affairs, Mohammed Shahriar Alam, called the shooting a "cowardly act on peace-loving people."

Several police officers were stationed outside the mosque on Sunday as worshippers remembered the victims and remarked on their devotion to their families and faith.

On Monday, Muslim community members were set to gather in Brooklyn to hold Islamic funeral prayers for the two men.

The shooting appeared to be the most violent attack against local Muslim leaders in recent years, said Ibrahim Hooper, national communications director for the CAIR. A report by CAIR and the University of California at Berkeley released in June said the number of recorded incidents in which mosques were targeted jumped to 78 in 2015, the most since the body began tracking them in 2009. Hooper said he could recall incidents in which an imam was pushed, called names or otherwise harassed. "Things like that, but nothing of this nature, nothing where people were killed," he said.

The shooting comes amid a climate of growing Islamophobia and anti-Muslim sentiment as a series of deadly attacks have unfolded in the United States and abroad.
RELATED TOPICS