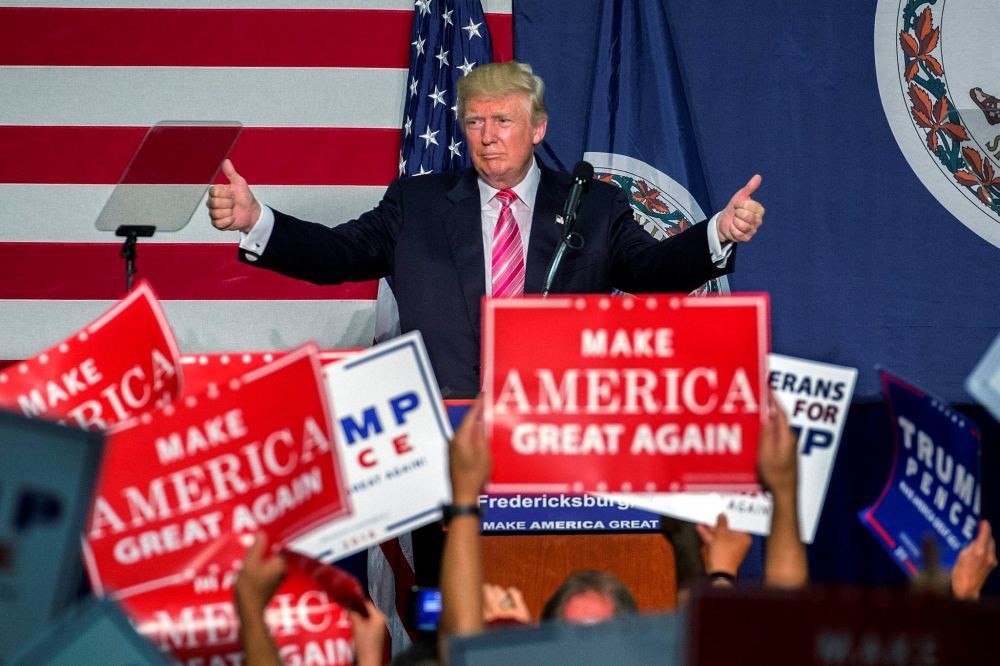 Republican presidential nominee Trump, known for his anti-Muslim, anti-refugee, and anti-black stance, has softened his tone against African-American people and has said his party must better the community's conditions

Republican presidential nominee Donald Trump said Saturday that his party must do a better job appealing to African-American voters and that he wants the GOP to become their political home as it was in the era of Abraham Lincoln. "I fully recognize that outreach to the African-American community is an area where the Republican Party must do better, and will do better," Trump said during a rally in Fredericksburg, located between Richmond and Washington in the critical battleground state of Virginia. In spite of past fiery rhetoric that alienated many minority voters, and speaking, as usual, to an overwhelmingly white crowd, Trump said that he wants "an inclusive party." He noted that the "GOP is the party of Abraham Lincoln" and said, "I want our party to be a home of the African-American voter once again."

Trump has been working in recent days to boost his appeal among African-American voters, declaring Friday that he could win 95 percent of the black vote at the end of his first term in office, if he is elected. Trump's new minority outreach efforts followed a shake-up in his campaign management in the face of falling poll numbers that quickly prompted noticeable changes to his campaigning tactics. In Fredericksburg, he spoke with the aid of a teleprompter, as he has at rallies all this week, and continued to strike a more inclusive, less caustic tone. Still, Trump continued to rail against the impact of illegal immigration, claiming that an influx to the state of Virginia was putting "enormous pressure" on local schools and public services. And he blamed "border-crossers" who are "being relocated to the state" for taking jobs away. "The people hurt most by our open border are low-income Hispanic and African-Americans who are competing for jobs and community resources against new arrivals," he said. Trump once again accused his Democratic rival, Hillary Clinton, of "bigotry," saying that she took black votes for granted. Earlier Saturday in New York, Trump met with his new National Hispanic Advisory Council for Trump, which will work to help him to focus his message, as well as provide assistance with the campaign's Hispanic outreach. Polling shows Trump lagging significantly behind Clinton among minority voters, partially due to some of the more wayward comments he has made since entering the race. He launched his campaign last year with a speech that accused Mexico of sending rapists and criminals across the border, and has since vowed to deport all of the estimated 11 million people living in the U.S. illegally, though some Hispanic supporters insist that Trump has softened his stance. Helen Aguirre Ferré, director of Hispanic communications for the Republican National Committee, who attended the meeting, called it a "game-changing" opportunity Saturday. Republican National Committee Chairman Reince Priebus also issued a statement saying the group's engagement "is just one component of our expansive effort to engage the Hispanic community, and their contributions will help us compete for every vote in every community all the way through Election Day." Trump also met Saturday with officers and detectives in the Stafford County Sheriff's Office in Stafford, located just north of Fredericksburg. Among the topics discussed: aggravated assaults on law enforcement, mental health issues, heroin and opiate addiction, school safety and active-shooter incidents, according to the campaign.

Meanwhile, Trump's campaign expenses more than doubled last month, even as the Republican presidential nominee held his payroll to about 70 employees, aired zero television advertisements and undertook no significant operational buildout across the country. Instead, about half of the campaign's $18.5 million in spending was vacuumed up by Giles-Parscale, a web design and marketing firm new to national politics, Federal Election Commission filings show. It's a crossover vendor from Trump's real estate organization. The campaign paid Giles-Parscale $8.4 million in July, about twice what the San Antonio firm had collected from it over the course of the preceding year. Brad Parscale, the president, is the campaign's director of digital marketing. The big expense came as Trump put a new emphasis on online fundraising, after paying for his primary run mostly out of his own pocket. Millions more went to air travel. The campaign paid about $2 million for private jets other than Trump's own TAG Air, which also collected $500,000. Some of Trump's consultants are also mysteriously well-paid. Chess Bedsole, the campaign's Alabama state director, was paid $64,000 last month for field consulting. His last campaign payment was for $15,000 in December. Yet the campaign's payroll remained thin, and there did not appear to be much new in the way of office leases across the country, including in critical battleground states such as Ohio.

Trump has relied heavily on the Republican National Committee for conventional campaign infrastructure. And he's boasted of holding the line on his campaign spending. But he's running critically low on time to build an operation that can compete with Clinton. In addition to being ahead of Trump in polls in key states, Clinton has maintained a staff of about 700 for months, opened up offices across the country and already spent $67 million on general election ads. Trump put out his first ads days ago, spending $5 million to air them in Florida, Ohio, Pennsylvania and North Carolina. Her campaign spent $38 million in July, about double his spending.
Last Update: Aug 22, 2016 11:29 am
RELATED TOPICS