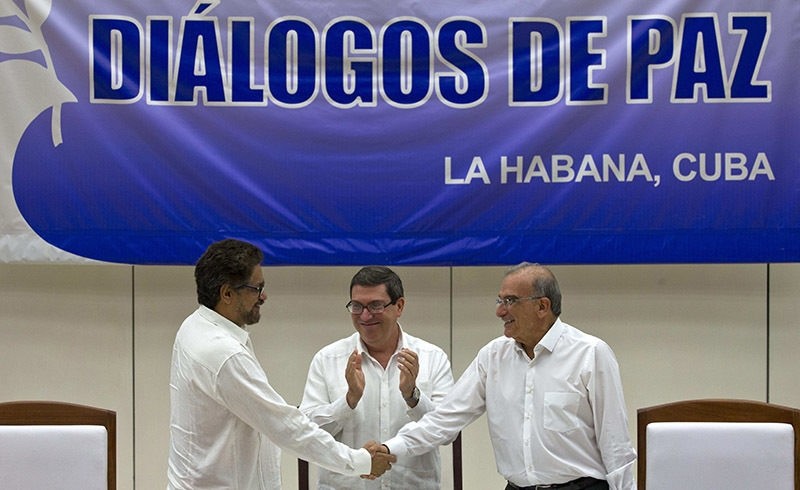 Colombia's government and the country's biggest rebel group reached a historic deal Wednesday evening for ending a half-century of hostilities in one of the world's longest-running and bloodiest armed conflicts.

President Juan Manuel Santos hailed the agreement with the Revolutionary Armed Forces of Colombia as an opportunity to turn the page on decades of political violence that has claimed more than 220,000 lives and driven more than 5 million people from their homes. He said he would hold a plebiscite on Oct. 2 to give Colombians the chance to vote on the accord. Without their approval implementation can't begin.

In Colombia's capital of Bogota, some 400 people gathered in a plaza to watch on giant screen the agreement being announced by negotiators in Havana who have been working around the clock in recent days to hammer out the final sensitive details left to the end of the four years of talks.

"We've won the most beautiful of all battles: the peace of Colombia," the chief FARC negotiator, Ivan Marquez, said at the announcement in Havana.

As soon as his speech finished, bringing the televised event to an end, the emotional crowd on the plaza sang the national anthem and shouted "Viva Colombia! Yes to Peace!"

"I can die in peace because finally I'll see my country without violence with a future for my children," said Orlando Guevara, 57, crying as white flags symbolizing peace waved behind him.

As congratulations poured in from the United Nations and other countries, U.S. President Barack Obama welcomed the deal. He said in a statement that the announcement was "a critical juncture in what will be a long process to fully implement a just and lasting peace agreement that can advance security and prosperity for the Colombian people." 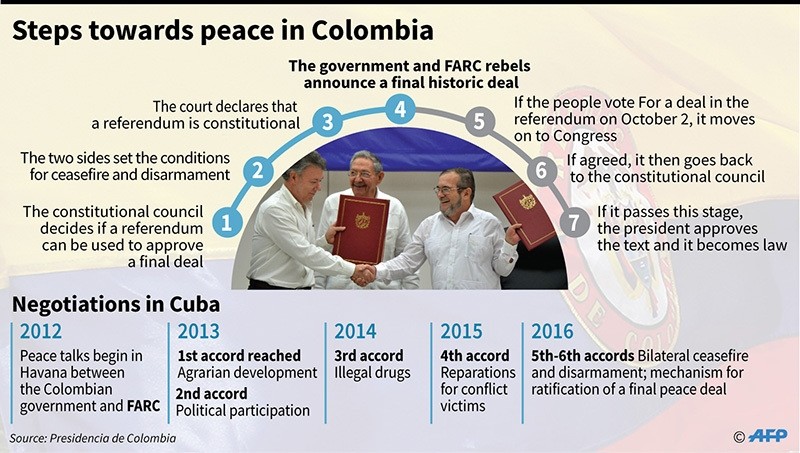 The accord, whose final text has yet to be published, commits Colombia's government to carrying out aggressive land reform, overhauling its anti-narcotics strategy and greatly expanding the state's presence in long-neglected areas of the country.

Negotiations began in November 2012 and were plagued by distrust built up during decades of war propaganda on both sides.

Polls say most Colombians loathe the rebel group known as the FARC and show no hesitation labeling them "narco-terrorists" for their heavy involvement in Colombia's cocaine trade, an association for which members of the group's top leadership have been indicted in the U.S. Meanwhile, the FARC held onto a Cold War view of Colombia's political and economic establishment as "oligarchs" at the service of the U.S.

The rebel army was forced to the negotiating table after a decade of heavy battlefield losses that saw a succession of top rebel commanders killed by the U.S.-backed military and the its ranks thinned by half to the current 7,000 troops.

Santos, an unlikely peacemaker given his role as architect of the military offensive, throughout maintained a steady pulse even as he was labeled a traitor by his conservative former allies and suffered a plunge in approval ratings.

The most contentious breakthrough came in September when the president traveled to Havana to lay out with FARC commander Rodrigo Londono a framework for investigating atrocities, punishing guerrillas for involvement in those abuses and offering compensation to victims.

Opponents of Santos and some human rights groups harshly criticized a key part of that deal: guerrillas who confess their crimes won't spend any time in prison and will instead be allowed to serve out reduced sentences of no more than eight years helping rebuild communities hit by the conflict.

Another toad to swallow, as Santos calls the concessions he's had to make, will be the sight of former rebel leaders occupying seats in congress specially reserved for the FARC's still unnamed political movement. In one of the last details brokered in marathon, 18-hour sessions, both sides agreed to guarantee the FARC a minimum of five seats in the lower house and five in the Senate for two legislative periods lasting until 2026. After that the former rebels will have to prove their political relevancy at the ballot box.

Santos' plebiscite is not without risks. While polls say Colombians will likely endorse a deal in a simple yes or no vote, the stunning Brexit vote in Britain to leave the European Union is a cautionary tale.

Colombia's opposition is likely to try to convert the vote into a referendum on Santos, whose approval rating plummeted to 21 percent in May, according to a Gallup poll. That is the lowest since he took office in 2010. Low voter turnout is also a concern because a minimum of 13 percent of the electorate, or about 4.4 million voters, must vote in favor for the accord to be ratified.

"We think we've done the best possible job, but it's the Colombians who will judge us," chief government negotiator Humberto de la Calle said. "We have to wait for the citizens' verdict."

After the agreement is signed -- the date is still unknown -- the FARC will begin mobilizing its troops to 31 zones scattered across the country, and 90 days later they are supposed to begin handing their weapons over to United Nations-sponsored monitors.

Over the last 13 months, since the FARC declared a unilateral cease-fire and the government reciprocated with a truce of its own in all but name, violence has fallen to the lowest level since the FARC was created 52 years ago by outlaw peasant groups joined by communist activists. Only four deaths attributed to the FARC have been reported during that period and in the last 68 days the group hasn't carried out a single offensive action, according to a report last week by the Bogota-based Conflict Analysis Resource Center.

Analysts are concerned that as the rebels integrate into Colombian society, well-organized criminal gangs will fill the void and fight among themselves for control of the lucrative cocaine trade that kept the FARC well-armed much longer than other Latin American insurgencies.

While Colombia's homicide rate has fallen sharply over the years, it remains among the world's deadliest countries, with violence driven largely by its status as the world's top supplier of cocaine.

The much-smaller National Liberation Army will also remain active, although it's pursuing a peace deal of its own.