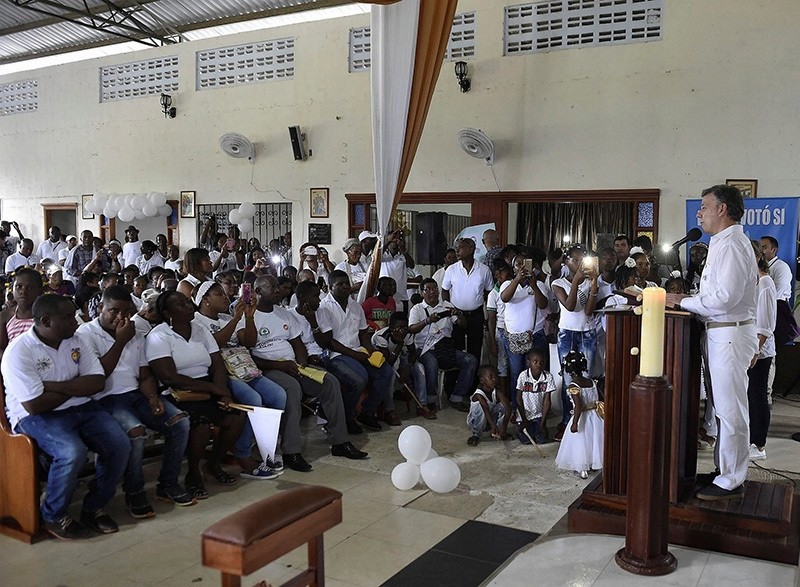 Colombian President J. M. Santos speaks during a mass in Bojayu00e1, Chocu00f3, one of the towns that has suffered most in the armed conflict in Colombia, announcing heu2019ll donate Nobel Prize money to victims, Oct. 9, 2016. (EPA Photo)
by Associated Press Oct 10, 2016 12:00 am

Santos made the announcement Sunday during a visit with his family and top government officials to an impoverished town in western Colombia where dozens of people, including many children, were killed while stranded in a church during an intense battle between leftist rebels and far-right militias.

He promised the residents of Bojaya that he won't give up on securing peace with the Revolutionary Armed Forces of Colombia despite voters' rejection of a deal with the guerrillas in a referendum a week ago. More than 96 percent of residents of Bojaya voted for the peace deal.

"You symbolize the suffering of the victims of 52 years of war and are at the center of the solution to this conflict," a visibly moved Santos told the crowd. "The victims have taught me that the capacity to forgive can overcome hatred and rancor."

Of the 81 municipalities nationwide hardest-hit by the conflict, 67 voted for the peace deal, according to the Bogota-based Peace and Reconciliation Foundation.

Santos was awarded the Nobel Peace Prize on Friday less than a week after the peace accord was shot down in a vote that even surprised government opponents. Polls taken before the referendum showed the "yes" vote winning by an almost two-to-one margin after Santos and FARC leader Timochenko signed the 297-page accord in front of world leaders and U.N. Secretary General Ban Ki-moon six days earlier.

During his visit to Bojaya, Santos attended a Mass at the church rebuilt following the mortar attack launched by the FARC. Residents gave him a replica of the Christ statue mutilated during the attack, a gift the president said he values as much as the Nobel Prize and which encourages him to find a way to implement the peace accord.

Santos said the donated money would be channeled to infrastructure projects in conflict areas and to victims' groups.

FARC leaders have twice visited Bojaya to ask forgiveness and discuss with community leaders actions to help the town rebuild.