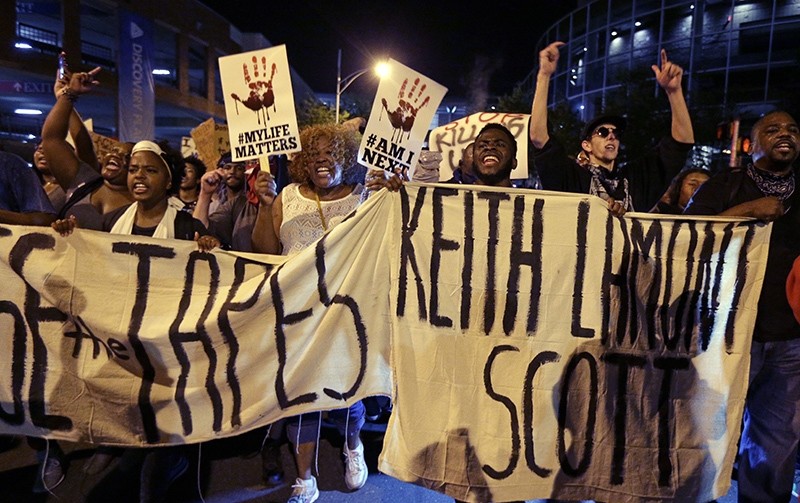 In this Friday, Sept. 23, 2016 file photo, protesters shout as they march in the streets of Charlotte, N.C., to protest the fatal police shooting of Keith Lamont Scott (AP Photo)
by Associated Press Oct 13, 2016 12:00 am

A black man shot and killed by a North Carolina police officer last month suffered fatal gunshot wounds to the back and abdomen, according to results released Wednesday from an independent autopsy conducted for his family.

Attorneys for the family of Keith Lamont Scott said in a statement that the family "authorized this release of information because, as they have maintained from the very beginning, they are simply seeking transparency."

Scott was shot to death Sept. 20 by a black Charlotte-Mecklenburg police officer. The shooting set off two nights of unrest in Charlotte and a series of marches and protests.

The autopsy, performed in the morgue at Newberry County Memorial Hospital in South Carolina on Sept. 30, was signed by forensic pathologist Kim Collins. Collins said the cause of death "is best deemed homicide."

According to the report, Scott suffered gunshot wounds to his left back, left abdomen and left wrist. He also suffered rib and wrist fractures.

Scott's wife, Rakeyia, said in an interview excerpt shown Wednesday on "CBS Evening News" that she and her family are still seeking answers from police about the shooting. Police have said Scott had a gun, which his wife denies.

"All we want to know is why," Rakeyia Scott said. "Why did you have to take Keith that day? ... Give us a reason, because everything that you're saying right now, it just makes me angrier each day because I just keep hearing more stuff."

The county medical examiner's autopsy results have not been released. Charlotte-Mecklenburg police didn't immediately respond to a request for comment Wednesday night.

Scott's funeral, which was postponed because of Hurricane Matthew's approach to the South Carolina coast, is scheduled for 11 a.m. Friday at First Baptist Church of James Island in Charleston, South Carolina.