Trump hangs up on Australian PM over refugee deal 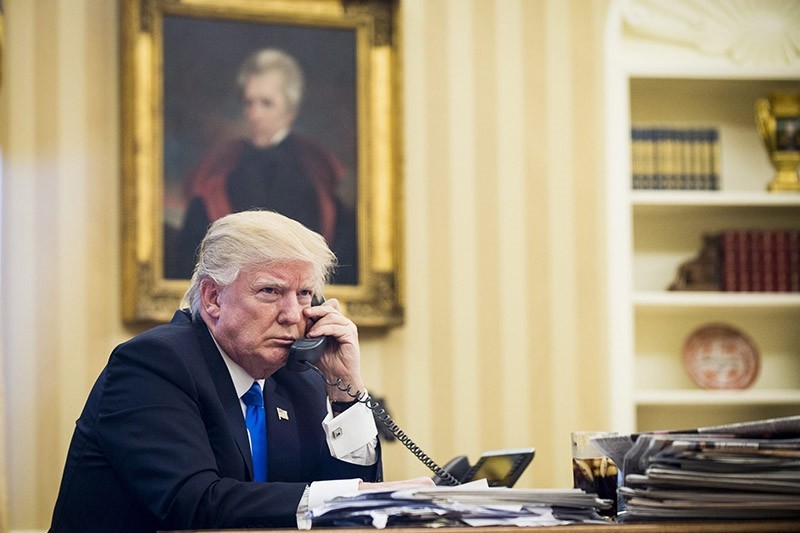 US President Donald J. Trump speaks on the phone with Prime Minister of Australia, Malcolm Turnbull, in the Oval Office in Washington (EPA Photo)
by Compiled from Wire Services Feb 02, 2017 12:00 am

President Donald Trump ripped into his Australian counterpart during their call last week, The Washington Post reported, castigating a refugee accord he described Wednesday as a "dumb deal."

Do you believe it? The Obama Administration agreed to take thousands of illegal immigrants from Australia. Why? I will study this dumb deal!

The new U.S. leader reportedly abruptly cut short his call with Prime Minster Malcolm Turnbull after criticizing the agreement to re-home people and exulting over his electoral college victory in the November poll, according to the paper.

Australia is considered one of the United States' closest allies -- one of the so-called "Five Eyes" with which the U.S. routinely shares sensitive intelligence -- and one might have expected the call to be smooth sailing.

But, according to the Post, Trump's assessment was the opposite.

Of his four coversations with world leaders that day "This was the worst call by far," it cited him as telling Turnbull, shortly before he terminated the telephone meeting.

Turnbull demurred Thursday when asked about the report.

"I appreciate your interest, but it's better that these things -- these conversations are conducted candidly, frankly, privately," he said.

"I can assure you the relationship is very strong."

The Post's account of the conversation is markedly different from the official read-out of the call provided by both governments.

Turnbull said Monday that Trump had agreed to honor the deal struck with then-President Barack Obama to resettle an unspecified number of the 1,600 people Australia holds in offshore processing centers in Nauru and Papua New Guinea.

There were fears the new US president would rescind it after he signed an executive order last week to suspend the arrival of refugees to the US for a least 120 days, and bar entry for three months to people from seven Muslim-majority countries.

After the Post story broke late Wednesday, Trump weighed in on Twitter and threw the agreement into doubt.

"Do you believe it? The Obama Administration agreed to take thousands of illegal immigrants from Australia. Why? I will study this dumb deal!" he wrote.

Opposition leader Bill Shorten called on Turnbull to be open about his interaction with Trump, saying The Washington Post version of the call was worrying.

"We shouldn't be finding out about what's happening to Australian policy through the news of foreign countries," Shorten said.

Turnbull has likened himself to Trump in that both are wealthy businessmen who came to politics late in life. Turnbull also has a reputation for blunt conversation and tough negotiations behind closed doors.

Turnbull has resisted pressure this week to join other Western leaders in condemning Trump's temporary ban of immigrants from seven Muslim-majority countries.

"When I have frank advice to give to an American president, I give it privately, as good friends should, as wise prime ministers do when they want to ensure they are best able to protect Australians and Australia's national interest," Turnbull told reporters on Tuesday.

Some observers suspect Turnbull has held his tongue because he is grateful to Trump for agreeing to honor the refugee deal.

Reports of the Turnbull-Trump conversation came as the U.S. and Mexican governments were denying claims that the former reality TV star had threatened to send troops into Mexico to deal with drug cartels.

Relations have plunged into the biggest diplomatic crisis between the two neighbors in decades.

Trump angered Mexicans last week by ordering the construction of a massive border wall and vowing to make their country pay for the wall.

Pena Nieto has pledged that his government will never pay for the barrier and he canceled a meeting with Trump scheduled for this week in Washington.

In addition to the row over the wall, Trump wants to renegotiate the North American Free Trade Agreement (NAFTA) with Canada and Mexico. Mexican officials expect talks to begin in May.