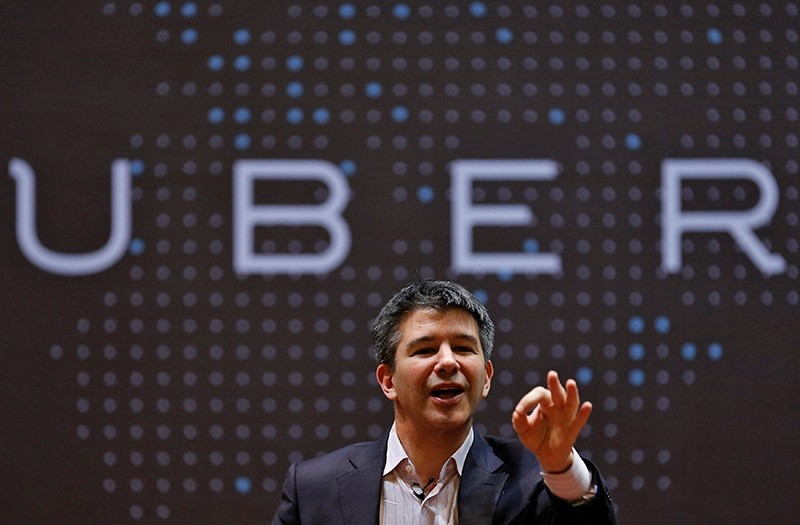 Uber CEO Travis Kalanick speaks to students during an interaction at the Indian Institute of Technology (IIT) campus in Mumbai, India, January 19, 2016. (Reuters Photo)
by Compiled from Wire Services Feb 03, 2017 12:00 am

The chief executive of Uber has backed out of a business advisory council set up by Donald Trump, a week after the new U.S. president issued an immigration order that raised concerns for the ride-hailing company and its employees.

Travis Kalanick spoke briefly with Trump on Thursday about the order "and its issues for our community," and told the president he "would not be able to participate" in the council, he said in an email sent to employees.

"Joining the group was not meant to be an endorsement of the president or his agenda but unfortunately it has been misinterpreted to be exactly that," Kalanick wrote.

His departure came on the eve of the first meeting of the group at the White House, planned for Friday.

Disney CEO Bob Iger won't attend either; instead he will be at a company board meeting in California, according to a person close to Iger who requested anonymity to discuss the CEO's schedule.

White House officials did not respond to requests for comment.

Led by Stephen Schwarzman, chairman and chief executive of the private equity group Blackstone, the council has about 15 members, including the leaders of Wal-Mart, Tesla, the Cleveland Clinic and Pepsi.

The council is "designed to provide direct input to the president from many of the best and brightest in the business world in a frank, non-bureaucratic, and nonpartisan manner," according to a Blackstone press release in December announcing its formation.

Yet public outcry about Trump — specifically his executive order suspending the country's refugee program and halting other aspects of immigration — has put some business leaders in an uncomfortable spot.

Uber, a ride-sharing company popular in urban, largely Democratic areas, has been buffeted all week by boycott campaigns that began when people perceived it as trying to break a taxi strike to and from New York's John F. Kennedy Airport that was in response to the executive order.

Kalanick condemned the executive order and has contributed to relief groups, but calls for a boycott had continued. One woman urging boycotts for all companies tied to Trump said only total resignation from the Trump business forum would satisfy her.

"This is not a 'seat at the table' moment. This is a flip-the-table moment," said Shannon Coulter, one of the organizers of the anti-Trump social media campaign "Grab Your Wallet."

Toby Cosgrove, CEO of the Cleveland Clinic, is planning to attend.

"He has an opportunity to talk directly to the president, and that is a good opportunity," said spokeswoman Eileen Sheil.

Sheil said the clinic employs doctors and caretakers from many countries, and was directly affected by the travel ban. She said a Sudanese citizen who is a first-year resident at the Cleveland Clinic is stuck in Sudan and unable to return to work.

Tesla Inc. CEO Elon Musk said in a statement that he'd attend. He said he and others on the council "will express our objections to the recent executive order on immigration and offer suggestions for changes to the policy."