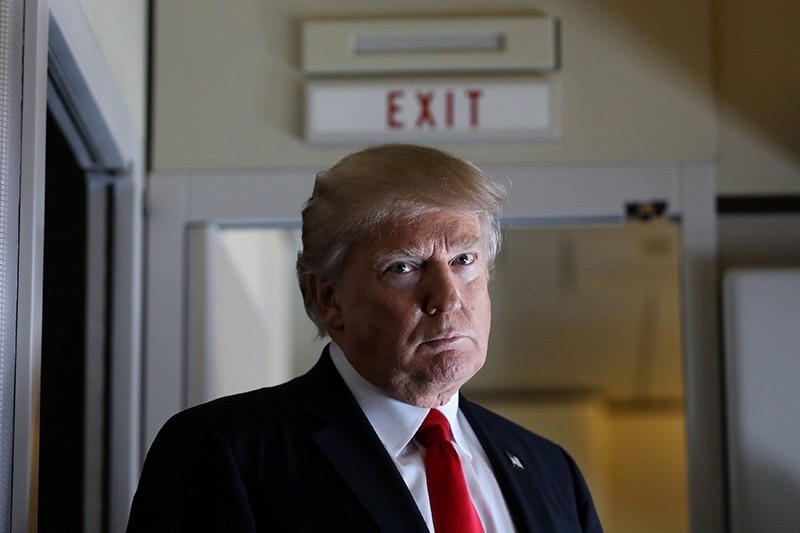 U.S. President Donald Trump pauses as he talks to journalists who are members of the White house travel pool on board Air Force One during his flight to Palm Beach, Florida while over South Carolina, U.S., Feb. 3, 2017. (Reuters Photo)
by Anadolu Agency Feb 04, 2017 12:00 am

"The opinion of this so-called judge, which essentially takes law-enforcement away from our country, is ridiculous and will be overturned!" Trump wrote on Twitter.

"When a country is no longer able to say who can, and who cannot, come in & out, especially for reasons of safety & security - big trouble!" he said.

Trump added that "certain" Middle Eastern countries "agree with the ban". He wrote: "They know if certain people are allowed in it's death & destruction!" The president talked with leaders of Saudi Arabia and the United Arab Emirates on the telephone last week.

The executive order Trump signed a week ago bars nationals of seven Muslim-majority countries from entering the U.S. for 90 days, freezes the U.S. refugee program for 120 days and bans Syrian refugees indefinitely.

It has caused tens of thousands of visas to be revoked and led to dozens of detentions nationwide, triggering mass protests across the country.

Late Friday, the White House expressed outrage and pledged to fight back against the restraining order.

"At the earliest possible time, the Department of Justice intends to file an emergency stay of this outrageous order and defend the executive order of the President, which we believe is lawful and appropriate," White House spokesman Sean Spicer said in a statement.

"The President's order is intended to protect the homeland and he has the constitutional authority and responsibility to protect the American people," Spicer added.

Federal Judge James Robart halted the order late Friday, leading border agents to declare that canceled visas would be reinstated and refugees with valid visas would be admitted into the U.S.

After obtaining the restraining order, Washington Attorney General Bob Ferguson wrote on Twitter: "No one is above the law — not even the President."

Hours earlier, the White House had won a smaller-scale legal victory when a judge in Boston unblocked the executive action in the state of Massachusetts, used as a transit route in the last week by those from the blacklisted nations who wanted to avoid detention as many sought to be reunited with family and friends.