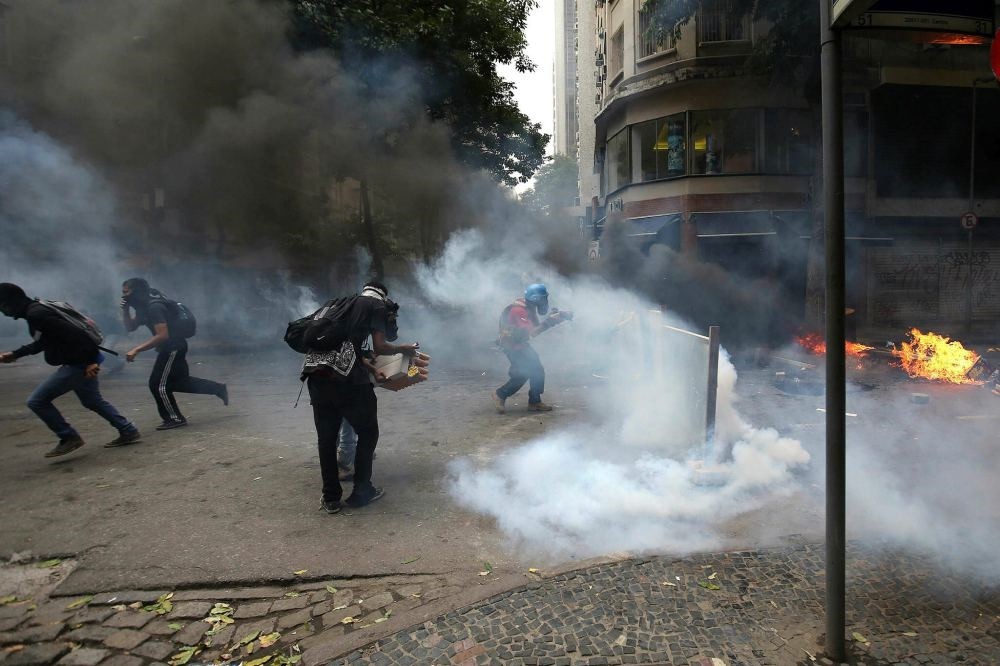 Protesters face off with police during a demonstration, in Rio de Janeiro, Brazil, Feb. 9.
by Compiled from Wire Services Feb 11, 2017 12:00 am
More than 100 people have been reported killed during a six-day strike by police in the Brazilian state of Espirito Santo, as hundreds of troops patrolled streets attempting to keep order with schools and businesses closed and public transport frozen.

The Army mobilized airborne troops and armored vehicles on Thursday to reinforce roughly 1,200 soldiers and federal police trying to contain the chaos in Espirito Santo, a coastal state north of Rio de Janeiro.

Most of the violence was centered in Vitoria, the state capital and a wealthy port city ringed by golden beaches and filled with mining and petroleum companies.

"We cannot establish definite motives for these killings at this time as the crisis is still ongoing," said Gustavo Tenorio, a spokesman for the police union. "But an initial evaluation by the homicide division seems to indicate that a majority of those who have died were tied to drug trafficking or some other type of crime."

Police in Espirito Santo are demanding a pay rise amid an economic downturn that has hammered public finances in Brazil, with many states struggling to ensure even basic health, education and security services.

There are fears strikes could spread to other cash-strapped states that are not paying police and other public servants on time.

Luiz Pezao, governor of Rio de Janeiro state, one of Brazil's most indebted, has already warned federal officials he may urgently need the backing of troops or federal police soon.

There are rumors of a pending police strike in Rio, a tourist hub that in three weeks will host one of the world's biggest Carnival celebrations, which draws partygoers from around the globe. Security officials have denied any such stoppage is planned.

State officials said they needed hundreds more federal troops and members of an elite federal police force to help establish order and make up for the absence of some 1,800 state police who normally patrol Vitoria's metropolitan area.

"The Army's involvement in Espirito Santo is temporary. It is here to make government negotiations possible and bring peace to the population. We are not going to replace the police," General Eduardo Villas Boas said on Twitter.

The state government has not released an official number for killings since police started striking on Saturday, but a spokeswoman for the union representing police told Reuters early on Thursday it had registered 101 homicides.

That would be more than six times the state's average homicide rate during the same period last year. The Globo TV network, citing security officials, reported that 200 cars were stolen in Vitoria on a single day, 10 times the daily average for the whole state.
RELATED TOPICS