Anti-Trump protests break out across Mexico 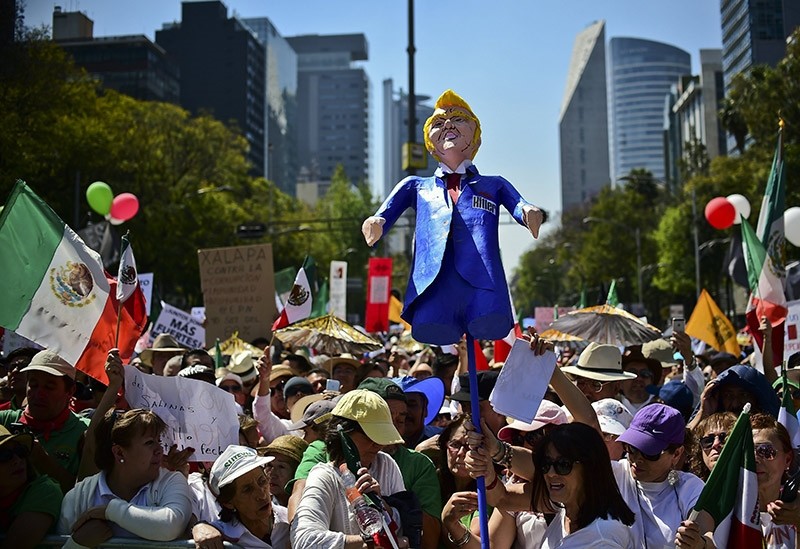 Tens of thousands of protestors took to the streets in more than a dozen Mexican cities on Sunday to hold demonstrations against U.S. President Donald Trump.

Demonstrators brandishing the Mexican flag walked in 20 different cities across the country and asked the President to respect the people of Mexico. Protestors carried signs in both English and Spanish and shouted slogans like "Mexico can never be defeated" and "Go away Trump!"

The protests were a call to Mexico's President Enrique Pena Nieto to protect his country's rights against the new administration in the United States. Protests were directed towards Trump's projected border wall, as well as his deportation and anti-immigration policies.

"We are here to protests Donald Trump's idea of building a wall and to support the Mexican people working in the United States," demonstrator Emiliano Montes de Oca told the Anadolu Agency.

The demonstrations were organized by some 80 non-governmental organizations and were not sponsored by any political party.

Three weeks into his administration, Trump confirmed he will move ahead with the construction of a border wall to "prevent illegal immigration" and "increase border security." He has also initiated a new push to deport millions of unauthorized immigrants from the country.

An organizer of the demonstrations, Maria Paro Cassar, said Trump has made Mexicans in the United States "his favorite target." She added, "His policies are a global threat against pluralism and diversity and they represent a particular threat to Mexico."

Trump has repeatedly said that the money for the 1,900-mile structure (3,100km) would be collected from the Mexican government. Mexican President Pena Nieto has denied this claim and stated that his government would not pay for the wall.