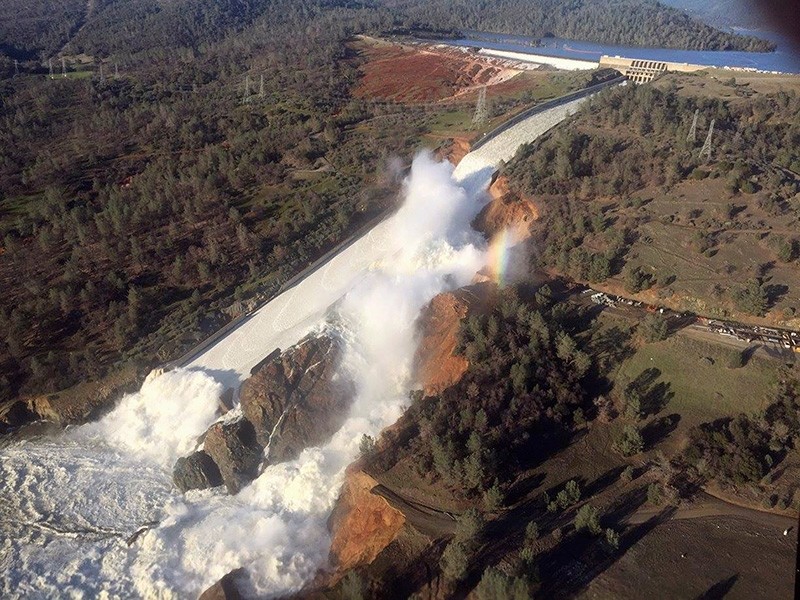 A damaged spillway with eroded hillside is seen in an aerial photo taken over the Oroville Dam in Oroville, California, U.S. February 11, 2017.(California Department of Water Resources / William Croyle via Reuters)
by Feb 13, 2017 12:00 am

Almost 200,000 people were under evacuation orders in northern California Monday after damage to the overflow channel of the tallest dam in the United States raised fears the spillway could collapse.

The reservoir of the Oroville Dam, located 75 miles (120 kilometers) north of the state capital Sacramento, had been completely full after several weeks of heavy rain.

The 770-foot (235-meter) dam itself was not in danger of collapse, the California Department of Water Resources said, but there were major fears over the emergency spillway due to erosion damage on its concrete top after water began pouring over it on Saturday.

Authorities were releasing 100,000 cubic feet (2,830 cubic meters) of water per second from the main spillway, bringing down the level of reservoir Sunday so that there was no more flow into the emergency channel, the Sacramento Bee newspaper cited Department of Water Resources spokesman Doug Carlson as saying.

Although the immediate threat had passed, the evacuation order remained in place as authorities evaluated the state of not just the auxiliary spillway but also the concrete-lined main spillway, which was damaged as well with a large gash caused by recent heavy volume. 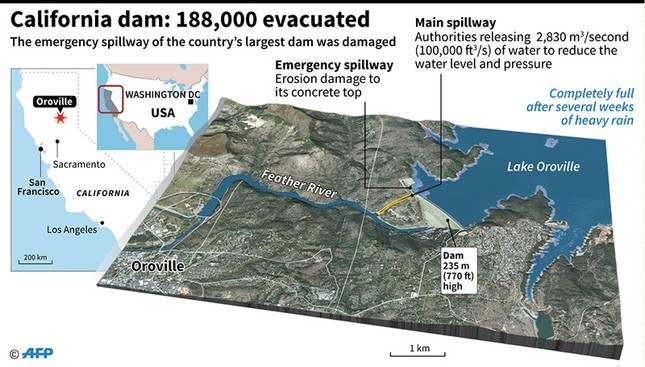 "Now that there is no more water going over the emergency spillway, though it brings stability to the situation, there are still a lot of unknowns," Butte County Sheriff Kory Honea told a news conference Sunday night.

"We're not at the point yet where we can make decisions about whether or not it is safe to repopulate areas."

About 188,000 people in downstream communities had been ordered to flee on Sunday afternoon as water was still gushing over the top of the wide auxiliary spillway.

In a Facebook post ordering the "immediate evacuation" of low-lying areas of the city of Oroville as well as downstream communities, the Butte County Sheriff's department warned that a "hazardous situation is developing with the Oroville Dam auxiliary spillway."

"Failure of the auxiliary spillway structure will result in an uncontrolled release of flood waters from Lake Oroville," it said, adding three times that this was "NOT A Drill."

To the south, Yuba County also ordered residents to move to safety.

"Yes, an evacuation has been ordered," the Yuba County Office of Emergency Services said in a Facebook post.

"All Yuba County on the valley floor. The auxiliary spillway is close to failing... Take only routes to the east, south, or west. DO NOT TRAVEL NORTH TOWARD OROVILLE!!!!!"

Helicopter footage from news station KCRA showed water pouring down the auxiliary spillway, which is parallel to the main spillway.

The water flowed through a gorge to a secondary reservoir, which was also very full, before draining into the Feather River that runs through Oroville, a city of about 20,000 people.

"I've been in close contact with emergency personnel managing the situation in Oroville throughout the weekend. It's clear the circumstances are complex and rapidly changing," he said in a statement.

"The state is directing all necessary personnel and resources to deal with this very serious situation."