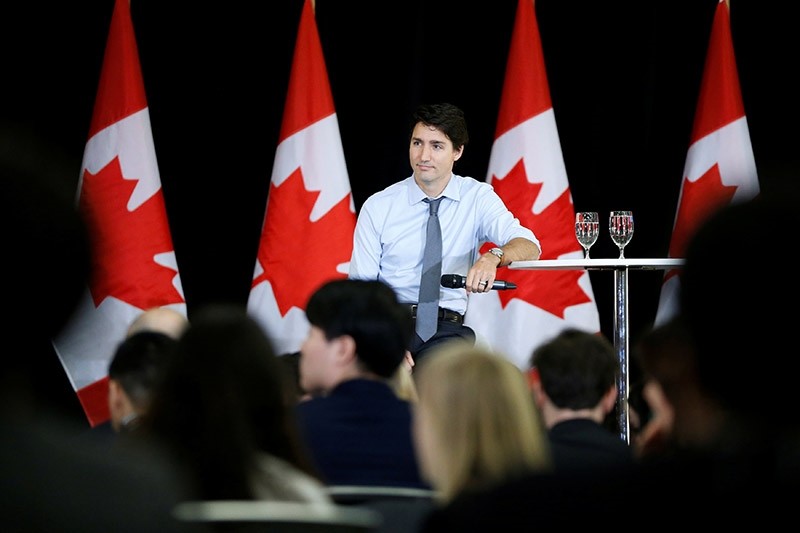 Canadian Prime Minister Justin Trudeau and U.S. President Donald Trump will participate in a roundtable discussion about women in the work force Monday, an early sign of cooperation as Trudeau seeks to have good relations so Canada is not targeted in trade talks.

In his first face-to-face meeting with the new U.S president, Trudeau will also meet with Trump to talk about trade and participate in a working lunch.

A White House official and a senior Canadian government official said the two countries plan to launch a new task force called the United States Canada Council for the Advancement of Women Business Leaders-Female Entrepreneurs. The officials agreed to confirm the move only if they were not quoted by name because they were not authorized to make the information public.

Ivanka Trump, the president's daughter who has been an advocate for policies benefiting working women, was involved in recruiting participants and setting the agenda for the roundtable. Female executives from the United States and Canada are expected to participate.

Trudeau's close cooperation with Trump and the first daughter could ease some worries among Canadians that the U.S. president will enact protectionist measures that could hurt the Canadian economy. It could also alleviate some fears that Trump will be as combative with Trudeau as he has been with the leaders of Mexico and Australia.

The Canadian official said Trudeau's administration had suggested the task force, because the prime minister considers the issue of working women an important part of his agenda and economic growth plan.

"It's a smart thing if Canada proposed this," said Nelson Wiseman, a professor at the University of Toronto. "It takes attention off of NAFTA. And from Trump's point of view, it contributes to softening Trump's image, and he's got a problem with women."

Relations with the U.S. are crucial as more than 75 percent of Canada's exports go to the U.S., while 18 percent of U.S. exports go to Canada. There are fears among Canadians that they could be hurt as Trump targets Mexico in a re-negotiation of the North American Free Trade Agreement.

Roland Paris, a former senior foreign policy to Trudeau, said the prime minister needs to build a relationship with Trump to ensure Canada is not hurt.

"The overriding priority will be for Canada to maintain secure and reliable access to the U.S. market and the supply chains that crisscross the border," Paris said.

Trump and Trudeau are a study in contrasts: their path to power, their political stripes, their style - they could not be more different.

Trudeau - who has not hidden his affection for Barack Obama, and his left-leaning positions - is 25 years younger than the 70-year-old U.S. leader.

Trudeau, the son of a well-liked prime minister, came to power promising to "provide a positive and good government for Canadians" and enhance the country's image abroad.

Manhattan property mogul Trump won the White House in a shock November election victory over Hillary Clinton after painting a dark picture of a country in turmoil and vowing to put "America first."

Welcomed with great fanfare to Washington nearly a year ago by Obama, Trudeau hailed the Democratic president's "leadership" on climate change.

But it's clear he will find a quite different take on the issue from Trump, who counts several climate skeptics in his inner circle and seems determined to undo large parts of his predecessor's legacy.

So far, Trudeau has not commented directly on Trump's controversial immigration order - which temporarily bans all refugees and travelers from seven Muslim-majority countries from entering the U.S.

But he made his stance clear in a tweet posted the day after Trump signed his decree late last month.

"To those fleeing persecution, terror & war, Canadians will welcome you, regardless of your faith. Diversity is our strength #WelcomeToCanada," Trudeau wrote.

The pair do agree on the massive Keystone XL pipeline project, which would carry oil from Canada's oil sands to U.S. Gulf Coast refineries. The project had been blocked by Obama, but has been given the green light by Trump.