Construction of Turkish mosque in US halted over tall minarets 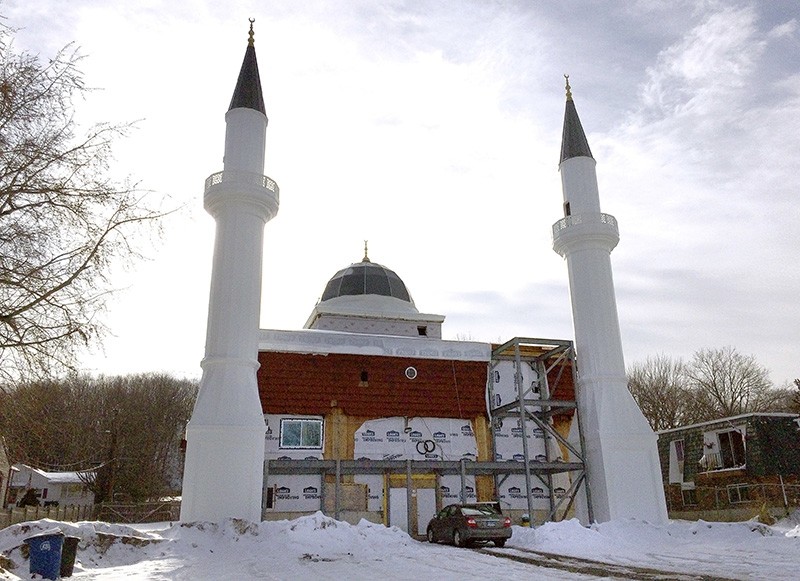 Construction at a mosque being built with support from the Turkish-American Religious Foundation sits suspended, Tuesday, Feb. 14, 2017, in New Haven, Conn. (AP Photo)
by Associated Press Feb 14, 2017 12:00 am

After exceeding a city height limit, builders of a mosque on New Haven's outskirts are wrestling with how to cut 24 feet from its soaring, crescent-topped minarets.

The city has halted all construction on the building until the mosque figures out what to do about the 81-foot towers sent from Turkey.

The steel and fiberglass minarets came in prefabricated sections and were assembled last year. A building permit was issued for a height of 57 feet, and by the time the discrepancy was discovered, the builders had moved on to other parts of the mosque, which is owned by the Turkish-American Religious Foundation.

The mosque, built to accommodate a growing Turkish Muslim community, sits across a busy road from an industrial park with a daycare center to one side and homes on another.

A city alder, Gerald Antunes, said some neighbors raised concerns about the height of the structure when the plans for the mosque were first presented five or six years ago. He discussed the height issue last week at a community management meeting.

"If it was a couple of feet, I would say, 'Let's try to work something out.' You're talking almost a two-story building too high," he said. "They need to come down to the authorized height."

In addition to going over the height allowed by the permit, the structure exceeds 60 feet and therefore would need inspection and approval from a third-party engineer, city spokesman Laurence Grotheer said. He said he was unaware of any complaints made to the city about the height.

"It's strictly a matter of compliance with the plans submitted and the permit issued," he said.

Minarets are slender towers traditionally used to call the faithful to prayer.

The leader of the congregation, Heydar Elevulu, told the New Haven Independent it has been a headache for him trying to address the issue with the city and the Turkish government, which is involved through the Turkish-American Religious Foundation. He told the newspaper that taking down the minarets would "touch the religion," and he has raised the issue with the mayor in hopes of finding another solution.

For now, the stop-work order dated Nov. 21 remains stapled to the plywood door of the unfinished mosque.