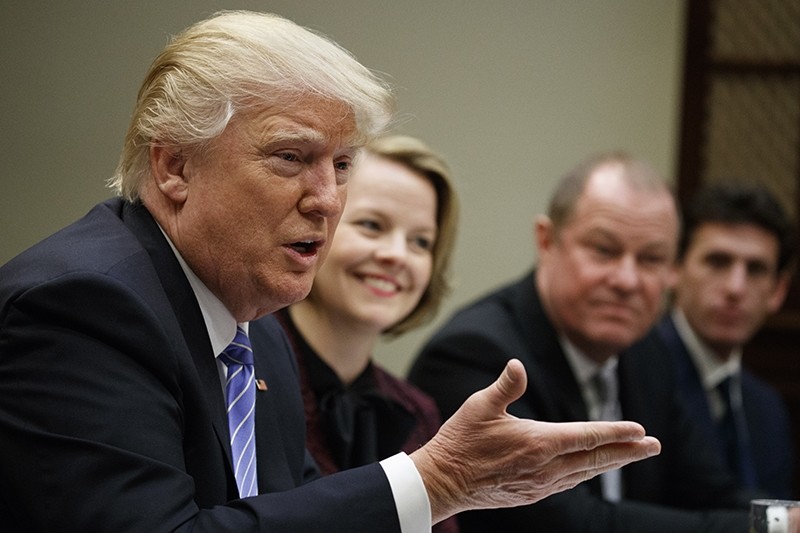 The New York Times reported late Tuesday that members of Trump's 2016 presidential campaign "and other Trump associates" had repeated contacts with senior Russian intelligence officials -- just hours after the White House denied any campaign officials were in contact with the Russians.

"The fake news media is going crazy with their conspiracy theories and blind hatred. @MSNBC & @CNN are unwatchable," Trump wrote on Twitter.

"@foxandfriends is great!" he said, referring to a morning program on the Rupert Murdoch-owned conservative channel.

The fake news media is going crazy with their conspiracy theories and blind hatred. @MSNBC & @CNN are unwatchable. @foxandfriends is great!

The Times' report comes in the wake of the abrupt departure of top Trump official Michael Flynn, who left the administration after it was revealed he misled senior officials, including Vice President Mike Pence, about his contacts with a Russian official regarding sanctions.

The U.S. president called Flynn a "wonderful man" in a joint news conference with Israeli Prime Minister Benjamin Netanyahu, and added: "I think it's very, very unfair what's happened to General Flynn, the way he was treated, and the documents and papers that were illegally, I stress that, illegally leaked."

Trump said the myriad stories on the administration's ties with Russia, which he called "this Russian connection non-sense", is an attempt to conceal unspecified mistakes in the campaign of Hillary Clinton -- his Democratic challenger in the presidential race.

"Information is being illegally given to the failing @nytimes & @washingtonpost by the intelligence community (NSA and FBI?).Just like Russia," he said.

Trump has repeatedly taken aim at leaks from within his administration as consecutive stories at odds with official accounts of events have been made public since he assumed office in late January.

Following Flynn's resignation, his administration is facing mounting criticism from Capitol Hill, including the Republican majority, with Senators pledging to widen an ongoing investigation into Russia's influence on the 2016 presidential campaign.

And a bipartisan group of House lawmakers introduced legislation Wednesday that would require congressional approval to ease existing sanctions on Russia.

Trump has often spoken kindly of Russia and its president, Vladimir Putin, and has hinted he would like to ease the economic penalties applied on Moscow after it annexed the Crimean Peninsula from Ukraine.