New survey suggests Americans warming up to toward religious groups, including Muslims 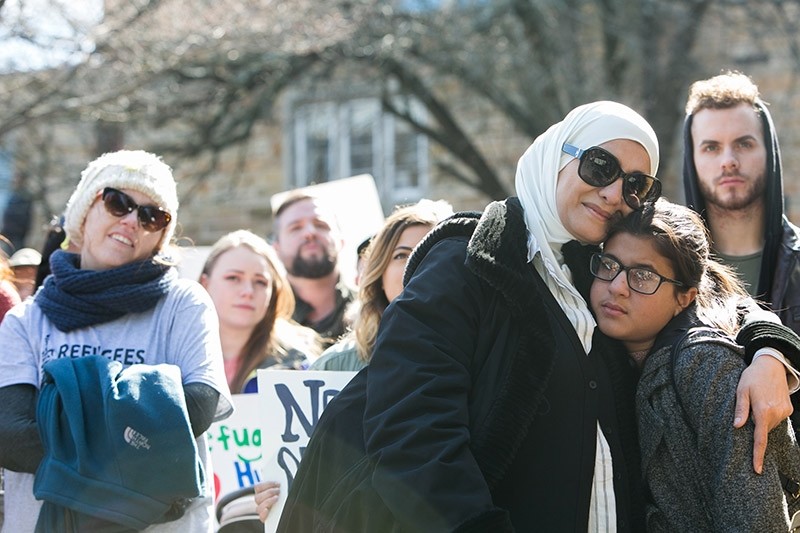 Palestinian immigrant and American citizen Kareema (left) hugs her daughter, Jenna, 13, during an Interfaith Rally for Muslims and Refugees on February 4, 2017 in Georgia. (AFP Photo)
by Daily Sabah Feb 16, 2017 12:00 am

A new Pew Research Center survey finds that Americans are expressing more positive feelings toward various religious groups than they were three years ago.

A total of 4, 248 participants were asked to rate a variety of groups on a "feeling thermometer" ranging from 0 to 100. The positive results came as a welcome surprise following an election year that has stirred up hostility along religious lines.

While Muslims and atheists still rank at the bottom of the poll, both groups received warmer ratings than they did on the same survey in 2014. Muslims rose to 48 percent from 40, and atheists advanced to 50 percent, from 41 in 2014.

Evangelical Christians were the only group for which the mean rating did not change since 2014, remaining at a warm 61 degrees.

The increase in ratings was spread across the board, and warm feelings were expressed by individuals from all the major religious groups, as well as from Democrats and Republicans, men and women, and younger and older adults.

However, Democrats tended to hold warmer feelings for Muslims, giving them an average rating of 56 on the feeling thermometer, up 9 degrees from 2014. Meanwhile, Republican and Republican-leaning participants rated Muslims a much cooler 39 degrees, which is still a 6-degree increase from 2014.

Black Americans gave Muslims the highest rating, with a warm 62 percent, as compared to white Americans, who gave them a mean average of 46 percent.

The report revealed that knowing someone in a particular religious group often made participants give that group a warmer rating. Fewer than half of the Americans who participated in the survey said they personally know a Muslim, at 45 percent.

The survey was conducted from January 9 to 23 of this year, just before the inauguration of President Trump. Pew Research center is a nonpartisan "fact tank" based in Washington, D.C.