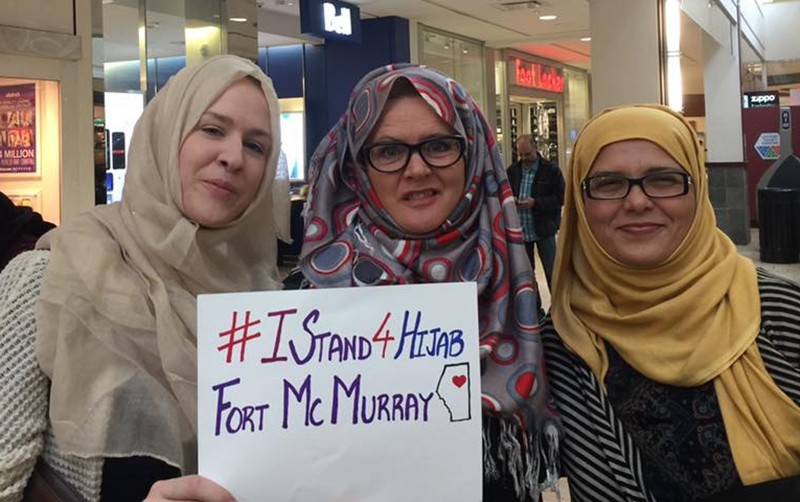 A group of Canadian women, who promised to wear the Islamic headscarf for a month following World Hijab Day to show solidarity with Muslim women have expressed that it has been a positive experience, amid growing Islamophobia and racist sentiment in north America and the rest of the world.

According to Canada's national public radio and television broadcaster CBC, seven women from Fort McMurray, Alberta, promised to cover their heads and body and avoid drinking in line with Islamic guidelines for a month, in an initiative called the "Sisterhood of the hijab."

While some of them said they were motivated to wear the headscarf following an attack on a mosque in Quebec, which killed six Muslims praying inside, while others said they are against the unjust generalization of peaceful Muslims as violent terrorists.

Women reportedly said that wearing the Islamic headscarf has allowed them to build friendships with Muslims living in Fort McMurray, while they noted that they have not been treated differently, although they've received 'a few awkward stares from people.'

Participants also said that wearing the headscarf made them feel empowered as they felt less like objects.

A participant by the name of Tarra Melanson even said that she felt she is more representative of feminism wearing a headscarf than she was when she didn't have it on her head.

"Because now when someone talks to me, they look at my face. They talk to me. What they get to know is the person that I am. My intelligence," she told the CBC.

According to a census made in 2011, one out of five people in Canada are foreign-born. The country has long been praised for embracing diversity.

The Canadian Charter of Rights and Freedoms, which is entrenched in the Constitution, offers protection of religious and other rights.