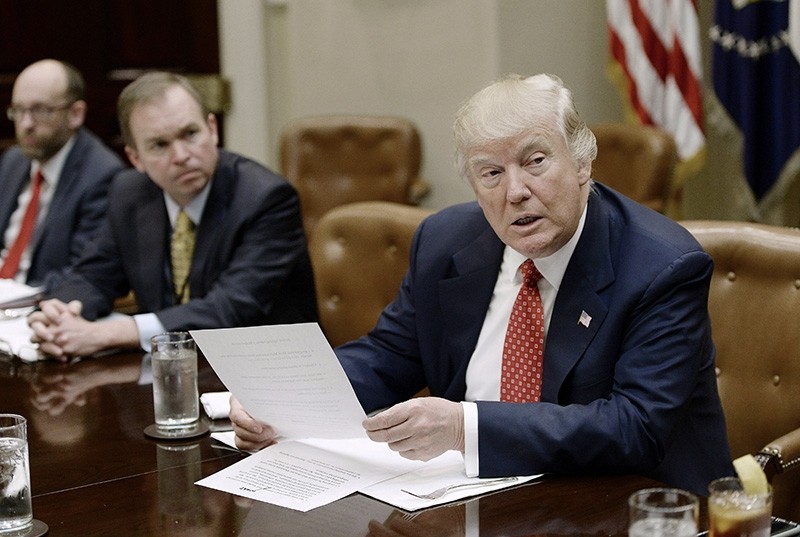 US President Donald J. Trump discusses the Federal budget over lunch in the Roosevelt Room of the White House in Washington, DC, USA, Feb. 22, 2017.
by Compiled from Wire Services Feb 23, 2017 12:00 am

The Washington Post claimed in a detailed analysis that U.S. President Donald Trump gave a total of 133 false or misleading information in his tweets, remarks, speeches and conferences in the first 35 days at the office.

The issue has resurfaced when Trump cited a terror attack in Sweden in a speech on Feb. 18 which in fact that did not happen, thus becoming a source of mockery for his critics, while the president himself has been insistently accusing the media for spreading fake news.

As expected, the area in which Trump resorted to false or misleading information the most is immigration with 24 times, followed by his biographical record with 18 and jobs with 17 claims.

Between Jan. 20, when Trump sworn in to the office, and Feb. 21, not a day went by without the president using false or misleading information, the analysis said.

As a sign for the deteriorating image of social media for spreading fake news, Twitter was medium that Trump used the most to share his allegedly false or misleading information for 34 times.

You may think that Trump uses his Twitter personally and having a hard time to get his facts straight (most probably the account is being managed by a professional team), however, his Twitter account was followed by remarks, prepared speeches, interviews and news conferences, in which he was prepped by a team of professionals.