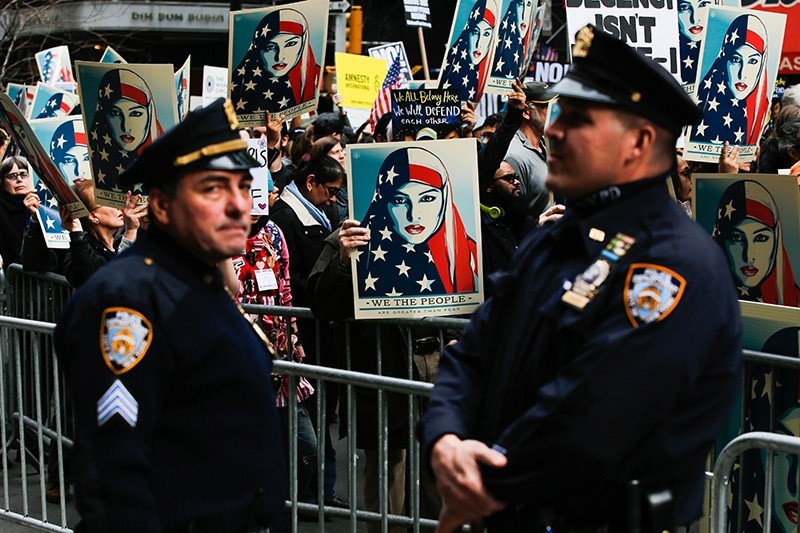 NYPD officers stand by as people take part in a rally called 'I Am A Muslim Too' in a show of solidarity with American Muslims at Times Square on February 19, 2017 (AFP Photo)
by Anadolu Agency Feb 24, 2017 12:00 am

A Muslim mother of four is pressing charges after New York City police allegedly detained her for hours with her hijab forcibly removed.

Rabab Musa, 34 says in the lawsuit filed earlier this week that she was traumatized by the incident that began in Times Square last September.

"The hijab is a sign of modesty for women in the Islamic faith and those who wear it do so in part to cover their hair from the opposite sex," says the lawsuit.

Police records show Musa was leaving Starbucks for home when she was arrested by officers, handcuffed and taken to the Midtown South Precinct department.

Her detention lasted six and a half hours. During this time, Musa claims she was interrogated for a crime she did not commit despite her lack of any criminal record.

She says she had her Islamic head cover removed, her picture taken without her consent and she was put in a holding cell with men.

Released without charges after midnight, Musa ended the mortifying experience by commuting alone from Brooklyn to her Midtown house, according to the lawsuit.

New York City Law Department is reviewing the complaint. The police have not commented publicly on the matter.