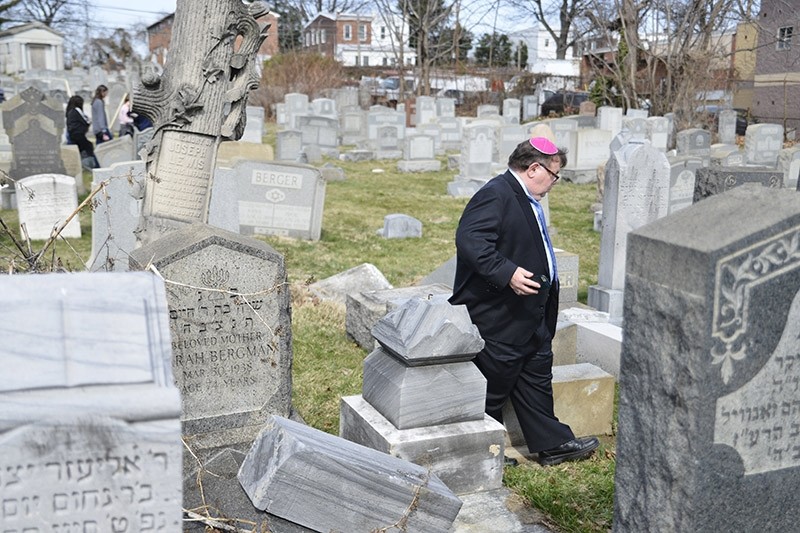 Shelly Farber searches for the resting place of his relatives at Mount Carmel Cemetery in Philadelphia, Pennsylvania USA 28 February 2017. (EPA Photo)
by Daily Sabah Mar 03, 2017 12:00 am

A Twitter user called "The Muslim Marine" first shared a tweet saying: "If your synagogue or Jewish cemetery needs someone to stand guard, count me in. Islam requires it."

"I've seen a tremendous outpouring of love and support from all Americans," added the former marine, whose real name is Tayyib Rashid, in a Periscope video.

Rashid's initiative to help promote peace between Muslims and non-Muslims went viral with thousands of people liking and retweeting his posts.

Many have followed in his footsteps offering help to the Jewish community, including Muslim military servicemen, lawyers and Emmy Award-winning TV broadcasters.

One of the supporters of the viral solidarity, broadcaster Momin Bhatti tweeted: "I'm a Muslim in #Harrisburg. If your synagogue or community center needs someone 2 stand guard, I will stand guard 4 you. Islam requires it."

Muslim Americans have already been helping the Jewish community by raising over $156,000 to rebuild the vandalized sacred spaces in St. Louis and Philadelphia.

According to the Jewish Community Center Association (JCC) of North America, at least 100 bomb threats have been reported against Jewish sites across the U.S. since the start of the year.