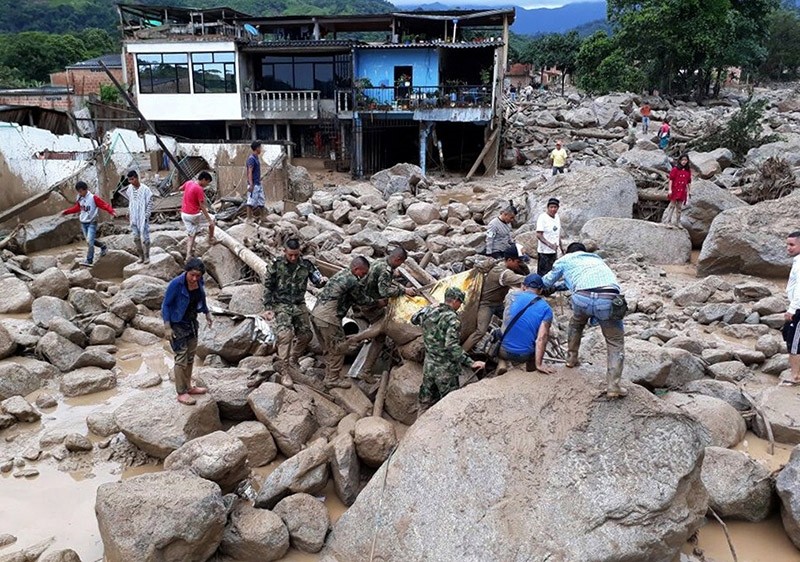 A handout photo made available by the Colombian Army shows soldiers evacuating a victim after a landslide in Mocoa, province of Putumayo, Colombia, 01 April 2017. (EPA Photo)
by Apr 01, 2017 12:00 am

They were the latest victims of deadly floods and mudslides that have struck the Pacific side of South America over recent months, also killing scores of people in Peru and Ecuador.

In the southwestern Colombian town of Mocoa a sudden surge of mud and water swept away homes, bridges, vehicles and trees, leaving piles of wrecked timber buried in thick mud.

The mudslides slammed Mocoa late Friday after days of torrential rain in the Amazon basin area town of 40,000.

On Sunday President Juan Manuel Santos is set to return to the town, the capital of Putumayo department, with cabinet ministers to supervise rescue efforts in the heavily forested region.

Santos met with rescuers and survivors in Mocoa on Saturday, and declared a public health and safety emergency to speed up rescue and aid operations.

"Dear God, I don't want to even remember that," said street vendor Marta Ceballos, who survived the mudslide.

"To see how some people screamed, and others cried, ran, tried to flee in cars, on motorcycles, and how they were trapped in the mud. It's all too, too difficult," she told AFP.

Ceballos said that she lost all of her material possessions. "The only things I fortunately did not lose were my husband, my daughters and my nephews," she said.

Putumayo Governor Sorrel Aroca called the event "an unprecedented tragedy" for the area.

There are "hundreds of families we have not yet found and whole neighborhoods have disappeared," he told W Radio.

Carlos Ivan Marquez, director of the National Disaster Risk Management Unit, told AFP the mudslides were caused by the rise of the Mocoa River and tributaries.

The flooded rivers caused a "big avalanche," the army said in a statement.

He promised earlier on Twitter to "guarantee assistance to the victims of this tragedy, which has Colombians in mourning."

"Our prayers are with the victims and those affected," he added.

One thousand emergency personnel, including soldiers and local police, were helping the rescue effort. Mocoa was left without power or running water, and there were reports of people looting stores in search of bottled water.

"There are lots of people in the streets, lots of people displaced and many houses have collapsed," retired Mocoa resident Hernando Rodriguez, 69, said by telephone.

"People do not know what to do... there were no preparations" for such a disaster, he said.

"We are just starting to realize what has hit us."

A landslide in November killed nine people in the rural southwestern town of El Tambo, officials said at the time.

A landslide the month before killed 10 people in the north of the country.

Climate change can play a big role in the scale of natural disasters, such as this one, a senior UN official said.

"Climate change is generating dynamics and we see the tremendous results in terms of intensity, frequency and magnitude of these natural effects, as we have just seen in Mocoa," said Martin Santiago, UN chief for Colombia.