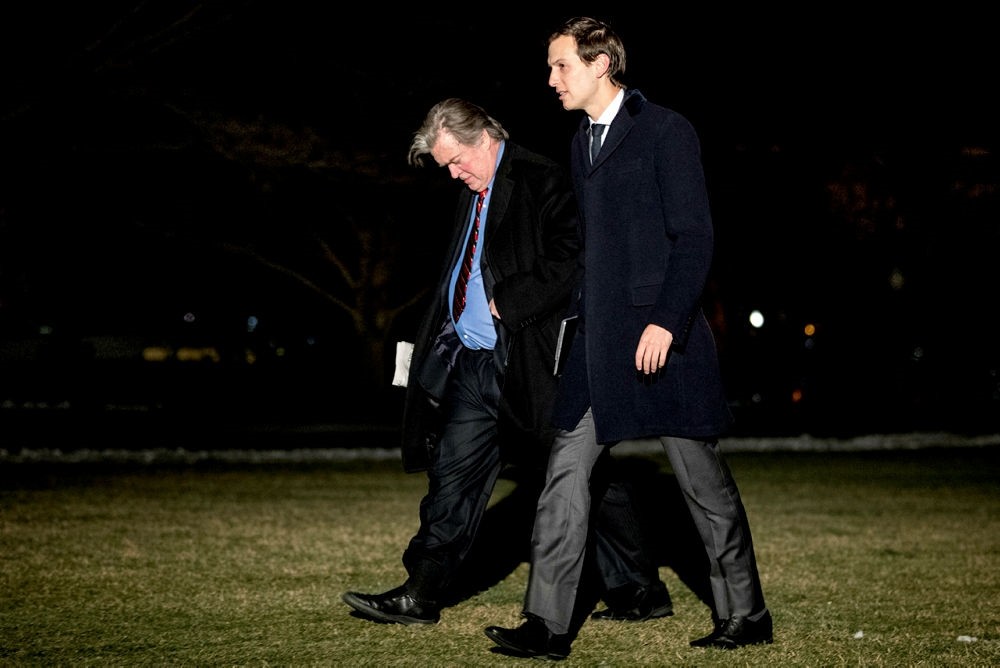 President Donald Trump's White House has been sharply divided by the rivalry between his powerful son-in-law with unfettered access to the president and the ideologue behind Trump's populist rise.

Senior adviser Jared Kushner and chief strategist Steve Bannon, arguably the two most influential voices in the West Wing, have clashed repeatedly in recent weeks over strategy to pass health care legislation, the fallout of the bogged-down immigration bans and, most recently, whether to intervene in the Syrian civil war.

Although the White House is rife with rumors of a staff shake-up, Trump's young administration is pushing back against reports of a pending West Wing overhaul fueled by squabbling among top aides.

Spokeswoman Lindsay Walters said in a statement Friday that the narrative of a dysfunctional administration on the verge of a makeover "is a completely false story driven by people who want to distract from the success taking place in this administration."

As evidence of that success, Walters noted the Senate's confirmation of Supreme Court nominee Neil Gorsuch, Trump's recent meetings with foreign leaders and the U.S. missile strikes in Syria.

"The only thing we are shaking up is the way Washington operates as we push the president's aggressive agenda forward," she said.

Still, the administration has been plagued by the public airing of infighting, with high-profile aides visibly jockeying for position. Trump himself is increasingly frustrated by the leaks that keep flowing out of the West Wing.

In recent weeks, tensions have mounted between Bannon and Kushner.

Bannon, the former head of the conservative news outlet Breitbart, powered Trump's populist campaign message. But some see his role as declining. This past week, Trump removed him from the National Security Council, reversing his decision to give Bannon access to the group's high-level meetings.

Kushner, who played a major role in the presidential campaign, is heading an effort to overhaul the federal government and has traveled to Iraq with the Joint Chiefs of Staff chairman. Kushner is allied with a group of aides who view themselves as more moderate forces, including economic adviser Gary Cohn, the former president of the Goldman Sachs investment bank.

Cohn's ascendance has been a flashpoint for West Wing tensions. Cohn, Kushner and Dina Powell, the deputy national security adviser, have been labeled the White House's "Democrats" by Bannon's allies, and the two sides have taken turns slinging anonymous arrows at each other in the press.

Bannon's side blames Kushner and his allies for trying to moderate Trump and move him away from some of his populist campaign promises. But Bannon has taken the brunt of the blame for the stalled travel bans and for the health care fallout; on that issue, Bannon wanted to force a vote to take names of Republicans disloyal to Trump.

Trump initially went along with the way the ban was rolled out, but he has since grown angry that Bannon did not craft the executive order so it could stand up in court, according to a person familiar with the president's thinking who was not permitted to publicly discuss private conversations and spoke on condition of anonymity.

Speculation has been rampant about chief of staff Reince Priebus, who has faced questions about his staying power since he started the job. That scrutiny intensified with the collapse of the House GOP health care overhaul, a major embarrassment for Trump.

Senior adviser Kellyanne Conway, at the forefront in the early weeks of the administration, has been less visible after a series of misstatements. She was one of only a few senior aides not present this week when Trump met with the Chinese president at Trump's Florida estate.

Chris Ruddy, a longtime Trump friend and the head of NewsMax, said Trump thrives on internal debate but does not like "when people are leaking or criticizing to the outside."

On whether Trump will make changes, Ruddy said he wasn't privy to internal discussion but noted, "Donald Trump has a history of ignoring what everyone says or thinks and keeping people he likes for a long period of time."

Nearing its first 100 days, Trump's presidency has been filled with personnel woes and limited policy victories. Installing his choice to the Supreme Court was a success, but his travel ban remains tied up in the courts. The House GOP health care bill failed spectacularly on its first attempt, and he is still dogged by questions about Russian connections.

Trump's administration faced a major international test this past week when the president ordered a missile strike on an air field controlled by forces loyal to Bashar Assad after a chemical weapon attack against Syrians.

America First Policies, a nonprofit stocked with aides close to Kushner and the Trump family, and recently joined by Priebus's former deputy, has been promoting the targeted strike as evidence of "America leading again."

But Making America Great, a nonprofit aligned with Bannon, is staying away from the Syria story altogether. That group, led by David Bossie and funded by the billionaire Mercer family - both close to Bannon and the far-right voters he cultivated — has focused on other issues, such as the Supreme Court nomination.